One of the reasons I’ve come to love the Thomas engines is their colors.  There’s a good variety, and they’re bright and vivid without making my eyes hurt.

The Little Engineer loves their colors even more than I do.  He even went through a phase when he would only wear plain-colored shirts.  They were (and still are, though less obsessively so) his “coats of paint”, able to magically change him into an engine of the matching color.  He also loves the idea of engines getting new coats of paint, whether to change colors or just polish up their appearance.

So I’m surprised I didn’t think of this sooner.  (Maybe I did, and just forgot.  It’s frightening how possible that is these days.) 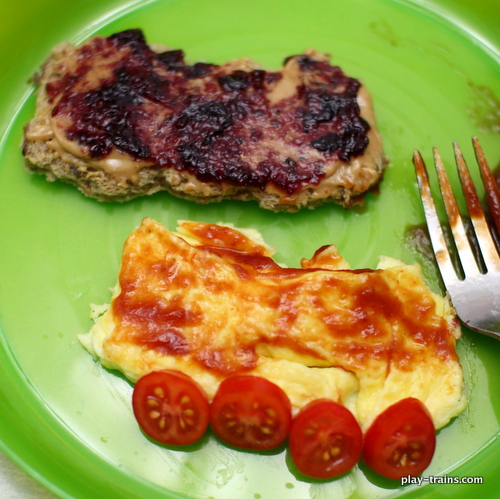 Thomas Toast and James Eggs. Not my best food photography ever, but pretty fun for the Little Engineer — I mean, Little Engine Painter.

I made an omelet (I’m not the one to ask for directions on this, as I’ve gotten pretty rusty since I left the B&B I worked at) and toasted up a slice of bread.  Then I used the Thomas cookie cutter from the Wilton Thomas Cookie Cutter Set to cut out one egg engine and one toast engine.  I pre-spread the toast with peanut butter, for a little extra “strong coal” as we call it around our house.  Then I presented them on a plate with ketchup (for James, a red engine if you’re not up on your Thomas engines) and blueberry jam (Thomas, blue engine) for “paint”, and a fork and a knife for “brushes”.  At the last minute, I added the slices of cherry tomatoes for James’ wheels. I realized later I could have sliced up some grapes for Thomas’ wheels. 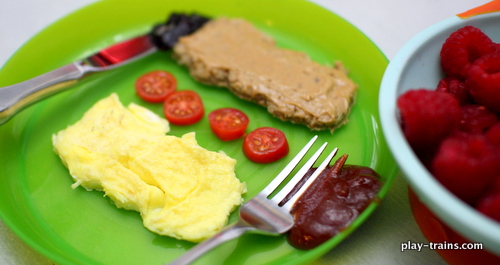 The breakfast engines, all ready to be painted.

“Breakfast time,” I called out.  No response — he’s still pretty ambivalent on the whole eating thing.  “We’re having James Eggs and Thomas Toast!”

And, he came running.  It didn’t take much explanation for him to see what to do, and he ate most of his breakfast.

Now, sometimes he will eat all of his eggs by choice.  But I had a feeling that wouldn’t be one of those mornings, which is why I came up with this in the first place.    The tomato wheels didn’t get eaten, but I didn’t expect them to, considering even when he ate cherry tomatoes in the past he would only bite into them if they were whole.  Anyway, I consider him voluntarily touching tomatoes at the dining table a step in the right direction.

You could also use the Percy cutter from the above set and offer up some pesto for green “paint”.  Or use a different set of train cutters.  Or maybe not use a cookie cutter at all and use a knife to cut out the shape, although that might backfire.  I’m pretty sure the Little Engineer only thinks these look like trains because he knows which cookie cutter I used to cut them out.  I’ve noticed the same effect when I use them to cut out sandwiches.  The resulting oblong blobs don’t look much like Thomas, but they are somehow much more exciting to eat anyway. 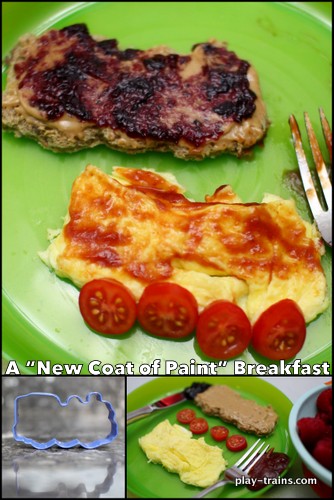