The Little Engineer needed something to wear for his second birthday party. When he turned one, I had a cute but run-of-the-mill first birthday onesie lined up well in advance. But due to his getting opinionated about his wardrobe over the course of his second year of life, a week before his party I had nothing special for him to wear.

What I did have, though, was an improvised felt Thomas I’d been working on in the evenings in front of the TV. I was winging everything about it (hence the lack of a pattern), from the shapes of the felt to the stitches to what on earth I intended it to be. I think it would have ended up as a toy or a pillow, maybe in his Christmas stocking. Instead, it became a shirt. 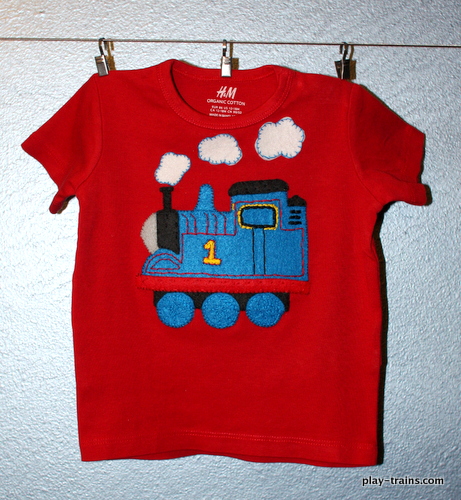 I did have a moment of hesitation. If I sewed a Thomas on to one of his shirts, would he insist on having Thomas on every piece of clothing from then on? (Nope.) In the end, I decided it was worth taking that risk to make him happy.

It took me most of that week before his party to finish it up, so poor were my sewing skills and strong was my perfectionism, but I ironed and stitched it on a bright red t-shirt and suddenly it looked pretty cool. I lost out on much of the time I’d meant to spend on his cake, but that turned out pretty well despite my procrastination, so no loss there. 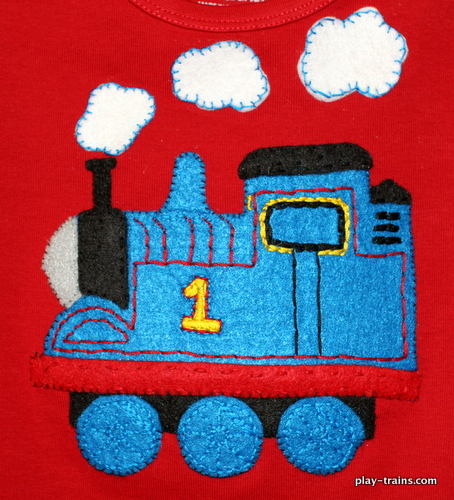 Click on image for a close-up of the stitching

Come the day of his party, the Little Engineer was spiraling down into unhappiness just as his guests were arriving. He refused to wear the shirt. I was heartbroken. But only briefly. In the way of toddlers, ten minutes later he was begging to wear it. He then proceded to wear it every day for a week, cheerfully agreeing to take it off every time he ate.  The upside to this–other than how happy it made him–is that I have a whole birthday week of photos of him in a bright, cheerful shirt.  It really photographed beautifully on him.