Every few weeks, we disassemble the tracks that take up the majority of the open floor space in our living room, vacuum the play mats, and start anew.  The last time this happened, we got off to a bit of a false start.  I deemed my original plan too dangerous due to the likelihood that the Little Engineer (or one of his parents) would trip over the steep ascending tracks up to “the Hills of Sodor” (i.e. the train table I had dragged in from the other room) and hit his head on the stone fireplace.  Then, inspiration failed me, and we were left with a couple weeks of a half-finished layout.

Thanks to that, we were overdue for something new.  Doubly so considering the Little Engineer had finally given me permission to incorporate the Brio tracks and destinations we’d snagged for unbelievable sale prices at Toys’R’Us last month into the main layout instead of a separate “Brio trains layout!” in his room.  So, here it is: 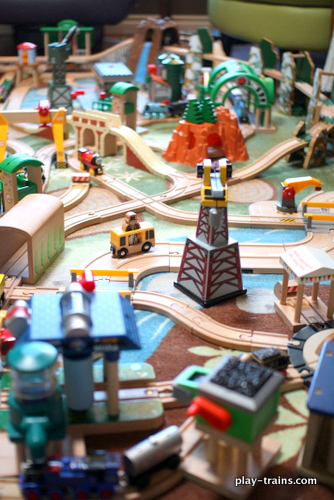 Looks pretty exciting, doesn’t it?  Despite the packed-in appearance here, it’s a very clean layout…a little too neat and tidy for me.  The addition of the Brio roadway running through one end gave a certain flatness and sparseness to that entire area. I’ll probably rotate the road in and out, since it takes up a lot of space in comparison to how much it adds to the mix.

I’d also prefer a much larger rail yard or docks area, or a quarry — I once built the coolest quarry! — but I found myself left with little room to spare.  I guess this is why I rarely attempt to build layouts on our train table.  It’s hard enough to fit half of the stuff we’ve accumulated and still leave a walkway through the room.

The Little Engineer thinks it’s plenty awesome, though, and that’s what counts. He’s been more and more involved in building the tracks with me, which makes things fun.

I do really like the mountainous area in the upper lefthand corner there.  It’s a combination of the waterfall mountain from an Imaginarium train table, the Thomas & Friends Gold Mine Mountain exclusive set from Toys’R’Us, and the Thomas Spiral Expansion Pack (along the back, built with straight tracks rather than curved).  One of the slopes of Gold Mine Mountain swoops down and under the track running across the supports from the spiral, and straight down into the Brio Central Station.

The Little Engineer likes the raised section of the track from the huge suspension bridge (at the bottom of the photo above, but hard to see) through the upper platform of the station and up again into the mountains.

The Little Engineer showed me something I hadn’t thought of before:  Sir Topham Hatt can ride inside a Brio bus! (It came with the Brio Wooden Road and Rail Travel Set.)  Now, realistically, how likely is he to take public transportation (outside of the railway he rules over)?  Still, I must say his ensemble and the paintwork on the bus coordinate nicely, and discovering it on the road today provided me with a much-needed laugh after all the brainpower I poured into trying to make everything fit together.