As I was watching the Little Engineer buzz up and down today’s special layout in his room, I realized we somehow managed to learn about art, biology, planning and executing a project, and gross and fine motor skills, all with a pile of wooden train tracks. If I hadn’t already been excited about the results, that would have done it! 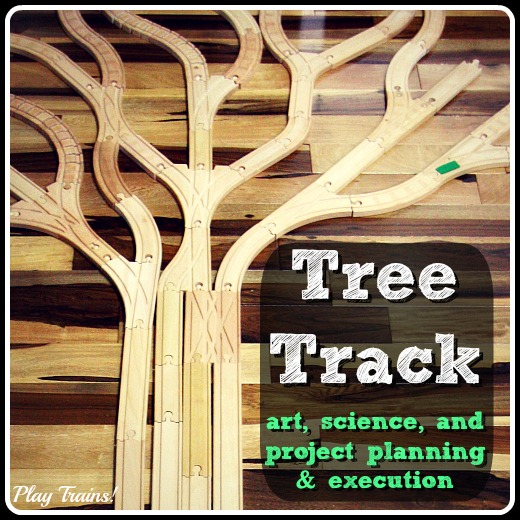 This post was originally published on June 22nd, 2012. It contains a link to Amazon.com. If you click on it, we will receive a small commission — at no additional cost to you — on anything you buy at Amazon for a certain length of time afterwards. I was otherwise uncompensated for this post. Read our disclosure policy for more details.

Christien Meindertsma’s Tree Track is a train track made from a “complete beech tree,” a kind of cross section from roots to branches split up into wooden tracks. It was created for a project called Make a Forest.I liked this explanation of their purpose from their website:

United Nations has announced 2011 the International Year of Forests. We have to rethink ways of sustainable forest management, locally and globally. Artificial trees connect us with nature and at the same time awaken creative thinking. Make a Forest is a creative response to the need to preserve and protect forests and a very visible way to explain and support the United Nation’s cause. But Make a Forest is also a tribute to the diversity of our forests. It is a testimony on its everlasting source of inspiration, and its connection to a sustainable future.

This work of art hit me on a couple of different levels. It’s plainly, simply beautiful, and the level of craftsmanship is something to behold. I particularly liked the design of the connectors as arrows pointing in the direction the sap would flow and the way the trains made to accompany the track are all put together from the jumble of wood parts at the tree’s roots. Tree Track also really got me thinking, trying to pin down the meaning of turning the tree into tracks in the shape of the tree. I haven’t been able to do that yet, but my thoughts have wandered down as many branches as the track takes, so it did it’s job. And, most of all, it’s just plain cool. Watch the awesome stop motion video to see what I mean:

My interest was sparked simply by the first photo I saw. The Little Engineer’s was captured by that video, with the trains assembling at the roots, bringing new pieces of track up the trunk, and disassembling at the top of the branches. I showed it to him a few days ago. When he asked to see it again today, I knew it was time to make our own version.

We watched the video a few times. When he was satisfied with that, we looked at the photos on the artist’s website. I told him a little about the origin of the piece, how it was meant to get people thinking about taking good care of trees. I pointed out the roots, the trunk with its four parallel tracks, and the branches to him a couple of times. 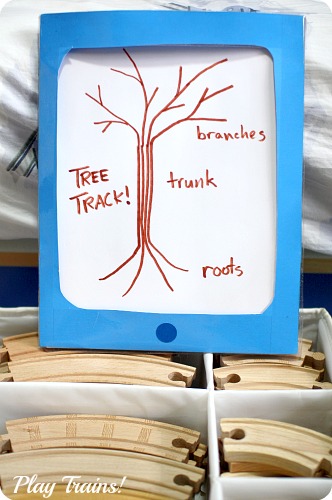 Then, despite the Little Engineer’s enthusiasm to get started, we took a moment to plan. I made him this “iPad” this week out of poster board, cardboard, and packing tape, a replacement for the less durable one I made him right after his dad got an iPad a few months ago. I drew the shape of the tree/tracks and labeled the parts. And then we rushed into his bedroom and started building. 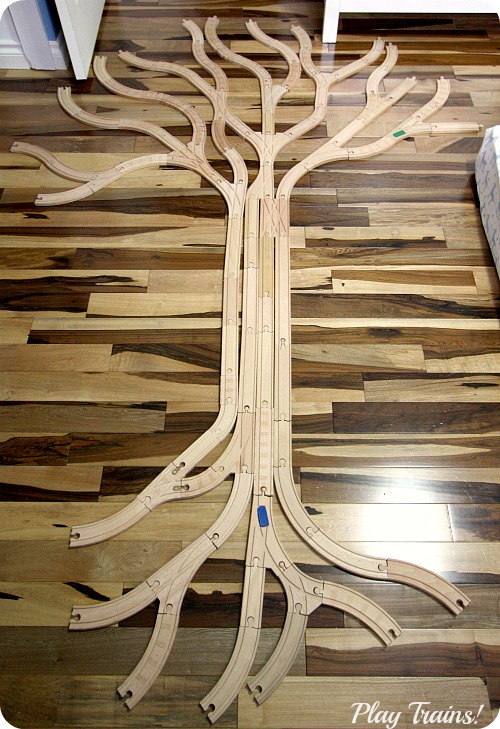 The excitement lasted all the way through building it, with many exclamations of “Tree track! Tree track!” punctuating his running narrative of what we were doing. When he would add a track that just didn’t work, I’d remind him of our plan and explain where we needed the tracks to be straight, and where they needed to branch or curve, and why the tree was shaped like that. At one point, he went over, picked up his iPad, and repeated the words we’d labelled it with. I grinned to myself, and kept building.

I really had a lot of fun making it, too. Normally function rules above everything else when building a track layout, so it was lovely to make the long, straight section of tracks, and then the wild curving parts at each end, focusing only on aesthetics. I did take care to join the four straight tracks to each other with split and crossover tracks. If we build a larger version someday, with all of his track, we’ll have more of the best of those for this purpose to work with (parallel crossover switches like these), so I should be able to hold the trunk together better. As it was, the tracks separated by an inch here and there while we were playing, but it wasn’t anything that couldn’t be easily fixed.

When we finished the track, we compared our plan on the iPad to the result and determined that we’d achieved everything we set out to do. “Hooray, Hooray!” he shouted, and so did I. 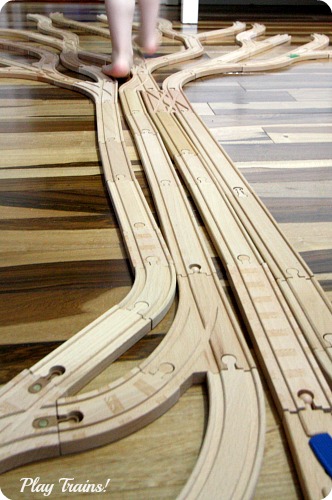 When I first saw the original Tree Track, I had wondered if he’d play with it differently than a normal track. And he did! Something about the trunk made him want to run up and down it, over and over. 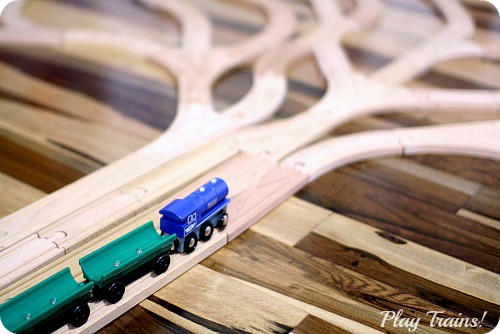 He also acted out a bit of the video, bringing tracks on these two barrel cars the blue engine was pulling to the ends of the branches and adding them on. As he did so, I talked a little about the roots drew water and nutrients from the soil, up through the trunk to the leaves at the tips of the branches.

The interesting thing was he didn’t play trains on it all that much. He was more interested in the track itself and running on it.

All in all, this was one of the coolest activities we’ve done together, completely exceeding my high expectations. I’m wondering what else we could do with track to learn about the natural world.