Safari Ltd. generously provided us with a Train Toob to try out. No positive review was required and all my opinions and observations are, as always, my own.

When Safari Ltd. offered to send us a Train Toob, the Little Engineer was so excited I knew I had to do something special with it.  I had set the bar high in his eyes when I got him the Steam Train Toob last year and froze it in a block of ice, the trains trapped and desperate for him to come to the rescue!

I mulled over several ideas while we waited for the Toob to arrive, but nothing excited me until the Little Engineer and I made some train tracks out of craft sticks. They were the perfect size for the Train Toob trains, and now I knew exactly what I wanted to make: a portable pretend model train set. 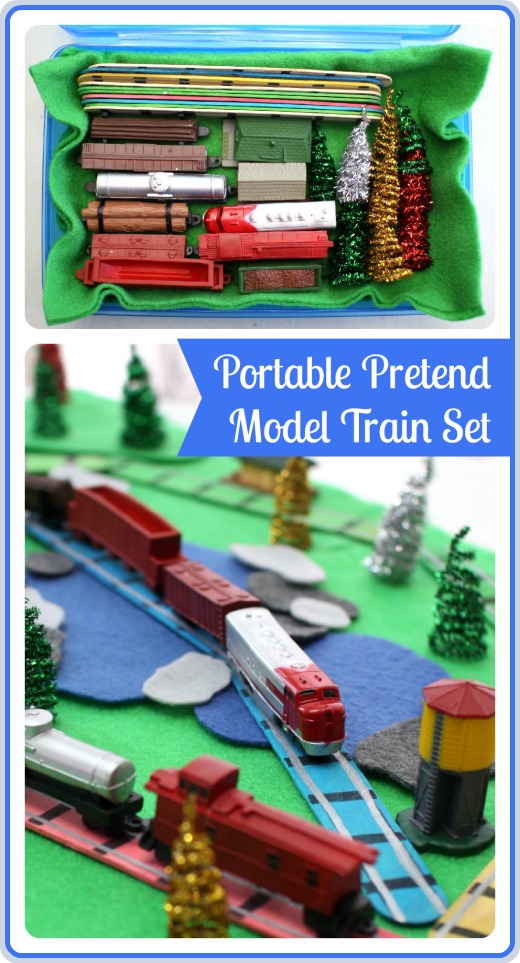 The most important element in a kids’ train set is, of course, the trains. For their size, the Train Toob’s engine, freight cars, and buildings are beautifully detailed. The engine is painted in a red and silver combo flashy enough to earn the admiration of my steam enthusiast.  We both appreciated the inclusion of two stations in this Toob. When we pick pretend passengers up at a station, it’s nice to have a destination to take them to!  To my surprise, I think we like this set with the diesel engine better than we like the steam train one, but I don’t think the Little Engineer would agree to give either one up. 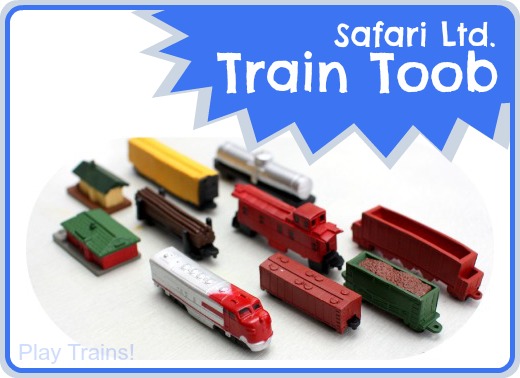 Soon after we got our Train Toob in the mail, the Little Engineer and I were hanging out at Metrix Create:Space, a place for makers to make cool stuff, while we waited for my husband to test a few of his train accessory designs on a 3D printer. The Little Engineer enjoys identifying himself as a “maker”, so even though he’s usually too distracted by all the cool machines and projects to make anything himself, I like to bring some supplies that we could create with should inspiration strike.

This time, I had brought some colorful craft sticks and markers in a blue pencil case. I started drawing tracks on the craft sticks, making sure to pick the flattest sticks.  We had a few wooden trains along to test out the snowplows coming off the 3D printer, and their wheels fit on either side of the craft sticks, which we both thought was kind of cool. 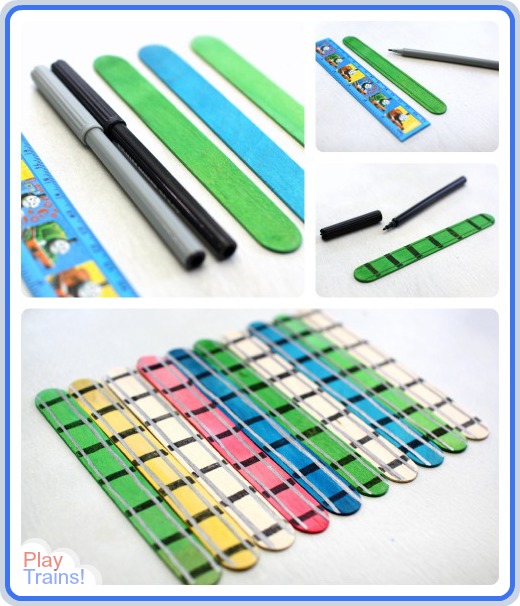 The next day, I was looking at my craft stick tracks, and it occurred to me that they were the perfect size for the Train Toob trains.  We needed more track, so I set about making some.  The Little Engineer tried drawing a few tracks with me, making an attempt at tracing the edge of a ruler. But then he decided they were parts for a “meerkat machine” he invented recently and drew freestyle on his craft sticks while I worked on the tracks by myself. 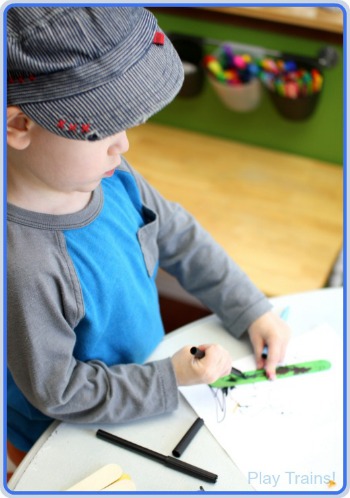 For the sake of aesthetics, I suggested setting aside the colorful craft sticks and making a full set of tracks on the natural, un-dyed craft sticks, but the Little Engineer liked the colors. He had plans for them. The blue tracks would be bridges over water, the green ones would be tracks going over grassy, overgrown tracks, and the natural ones would be tracks with just ballast beneath them.  After a moment of thought, he told me the red track went over a patch of red flowers.

Listening to this gave me the idea to add scenery to the trains and tracks. And with the blue pencil case sitting right there, it wasn’t long before I was creating a pretend model railway to fit inside it.

In addition to the craft stick tracks, I made some tiny trees with some super thin metallic pipe cleaners, just like the ones in my Pipe Cleaner Trees tutorial. The only difference other than using a single, extra thin pipe cleaner for each one is that I wrapped them tightly around the tapered end of a pen instead of a cardboard cone. I also cut pieces of felt to create scenery (similar to the larger scale scenery in the last few pictures of the Pipe Cleaner Trees post) and included a couple of pieces of green felt to lay down as a base for the felt landscape. 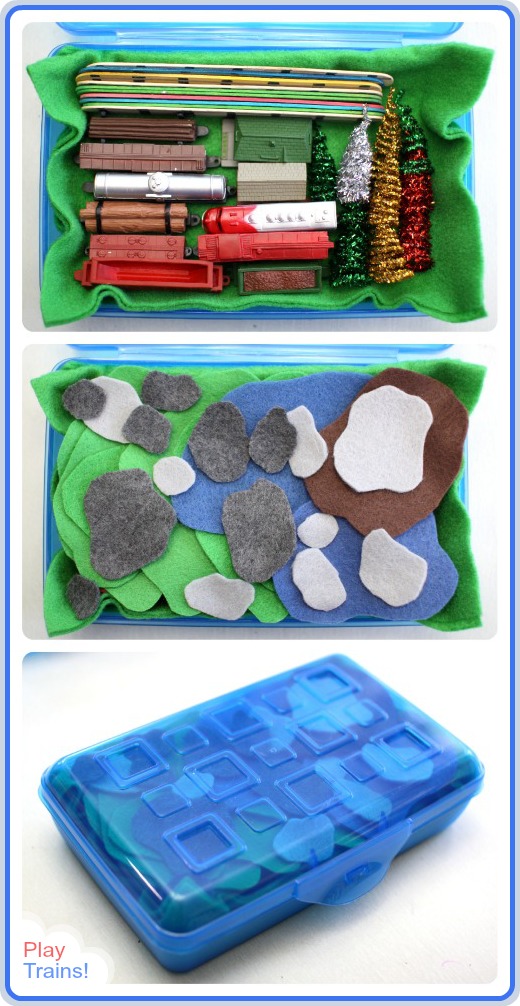 I was amazed at how much I was able to fit in the pencil case.  First, I folded each of the green sheets of felt in half and pressed them into the bottom of the case. Then I arranged the tracks, trains, and buildings.  The trees fit at one end if I nested them together in groups of three.  Finally, on top, I layered the felt scenery pieces. The Little Engineer requested that I add the steam engine, water tower, station, and a couple of freight cars from the Steam Train Toob, and we managed to wedge them in as well.

Because this was a pretend model train set, the Little Engineer insisted on having a model train controller.  So before we went out, I opened the case once more and added several different sheets of color coding labels and hole reinforcers to be the “buttons” and yet another craft stick to serve as the body of the “controller.” 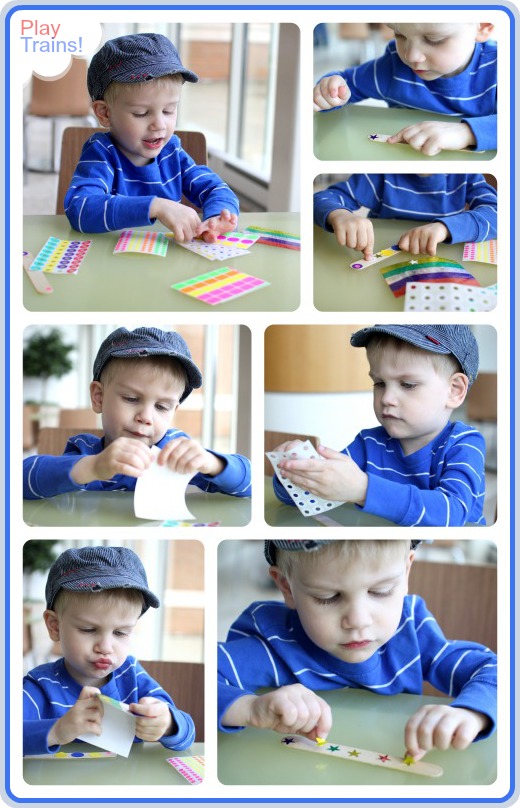 We headed to the food court at the mall to give the set a real world test run.  The creation of the controller alone captured the Little Engineer’s attention for quite a long time.  I was happy to see both his smiles and his looks of intense concentration. Peeling and placing little stickers can be quite a good fine motor workout, especially when you’re trying to put two gold stars on at once! 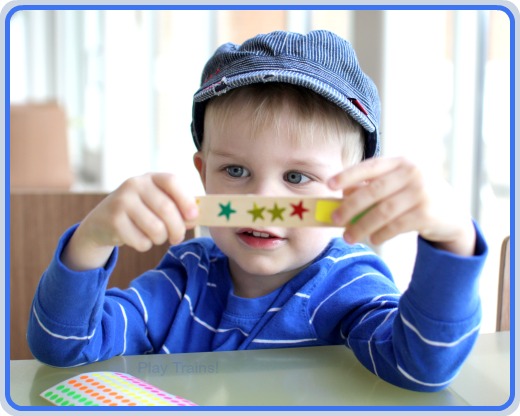 He didn’t stop until both sides of the craft stick were covered in stickers. He was quite proud of his creation and eager to show it off.

But then it was time to set up the model railway.  With obvious delight, he dumped the whole set onto the table. Time seemed to slow as I watched, dreading the inevitable scattering of tiny trees and trains and felt rocks everywhere, my one fear regarding the practicality of the set. 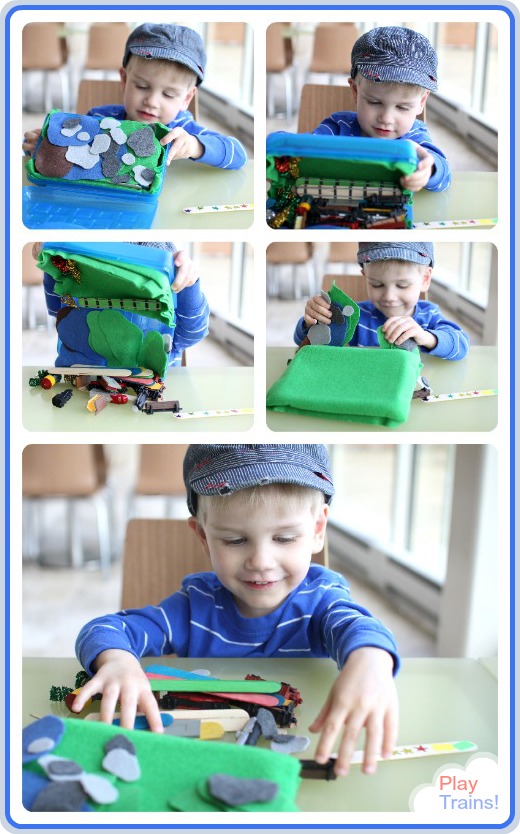 But that didn’t happen. The felt and the metallic pipe cleaners all stuck to each other and came out in more or less one big clump! Also, the lack of wheels on the engine and freight cars meant they couldn’t go rolling off the table. 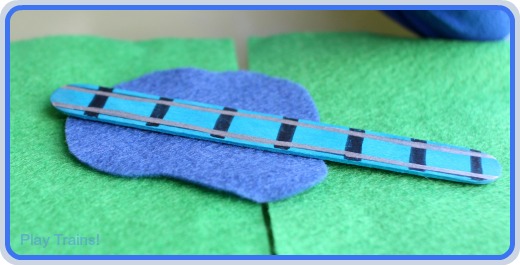 One of the first things he did was to place a blue “bridge” track over a lake. The different colors of tracks added a lot to his experience of arranging the train set. I was so glad I’d asked before going ahead and replacing them with natural wood tracks. 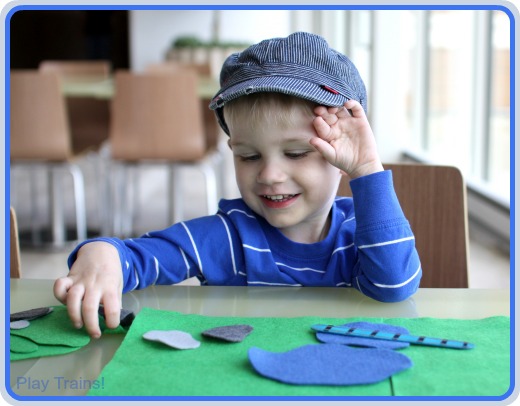 He really enjoyed setting up the landscape.  My favorite part was when after fiddling with a couple of the trees for a moment, he suddenly declared, “It’s the tallest tree ever!”

I looked out from behind the camera and laughed.  “Why yes,” I said. “It is the tallest tree ever!” 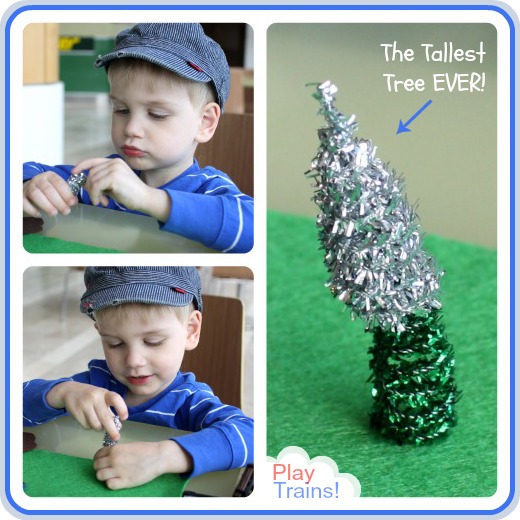 It fell over a moment later, which just made him laugh more.

Setting up the scenery occupied him for a very long time. He talked the whole time, mostly narrating an imaginary YouTube video review of his new model train set, but there were times when he was more intensely focused on the design of the layout. I think the small size of it gave him a real feeling of control over all the elements. And once again, he was getting a lot of fine motor practice trying to place the pieces exactly where he wanted them and being very careful not to squish the trees as he did so. 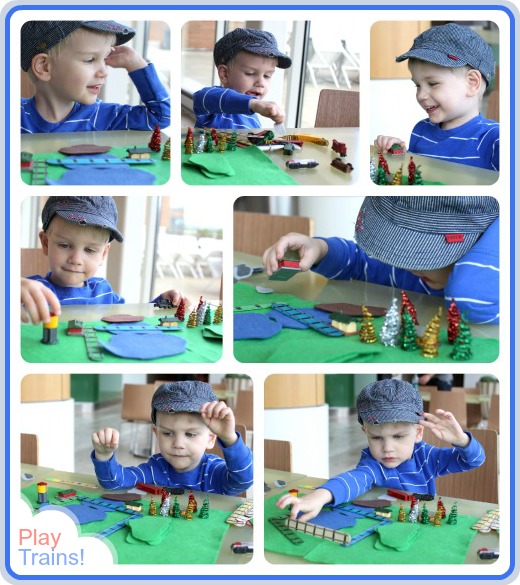 When the track was finally laid, he picked up his controller.  For a moment, he seemed to contemplate the awesome responsibility he held in his hands. 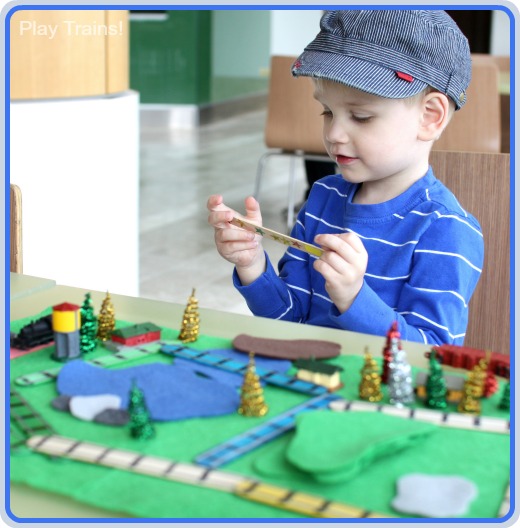 And then, he began to PLAY. 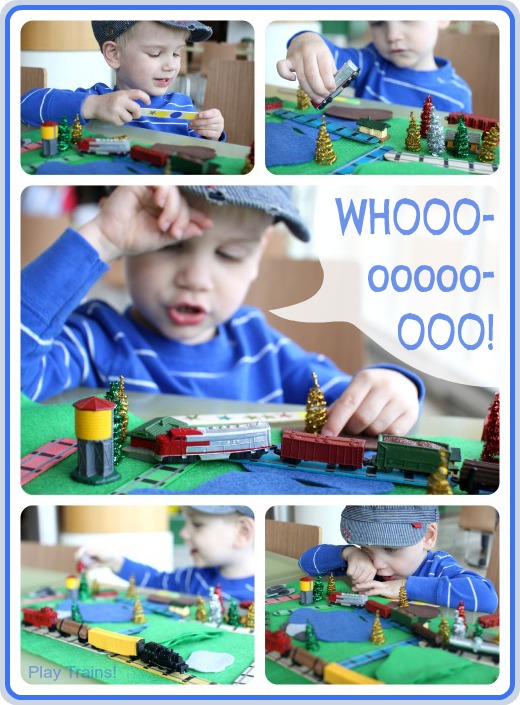 I loved watching him hunched over that controller he had made, staring at the diesel engine at eye level.  And hearing him shout, “WHOOO-ooo-OOOO!” (Perhaps this would not be the best choice of activity for him if we were somewhere where he needed to be quiet.) I couldn’t quite hear everything the Little Engineer was saying as he played, but the bubble of imagination surrounding him and his little train world was a palpable presence at the table. While he was playing, it was the model train set he’s been dreaming of for the past year. 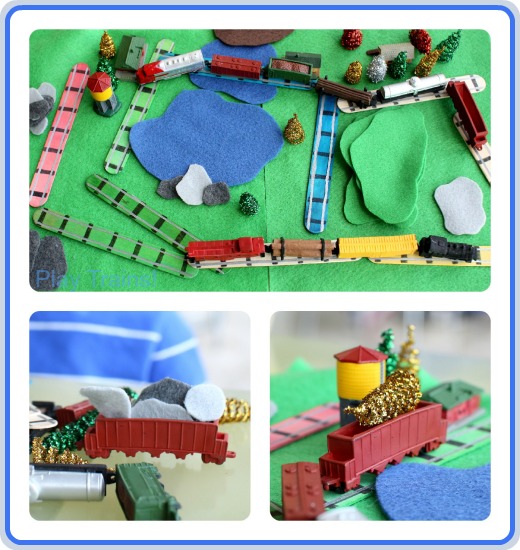 While playing, he discovered some of the scenery elements — the rocks and the trees — fit in the Train Toob’s hopper car. That added lots of possibilities to the set.  It already evoked a Northwest logging railway for me, so the fact that the trees could be “cut down” and “hauled off” only heightened that image in my mind.

When it was time to leave, it took less time than I expected to pack the set back into the pencil case. All in all, I think it worked extremely well as an away-from-home activity: it packs a lot of interesting play pieces in a small container, the pieces aren’t likely to get accidentally scattered about, there are multiple stages of play to keep renewing a child’s interest, and as a bonus it looks pretty nice, given the inexpensive materials I used for the scenery.

And, most importantly, as soon as the blue pencil case comes out, the Little Engineer wants to play with it.  I set it up myself to get a few more photos, and I was immediately bombarded with requests to play with it after I was done.

The great thing about the Train Toob or Steam Train Toob is that there’s a lot of other things you can do with the trains besides put them into a pretend model train set. They also make great stocking stuffers, advent calendar prizes, and Easter egg fillers!

The giveaway is now closed. Thank you to everyone who entered!

Thanks to Safari Ltd., I have one to give away.  And even better, if the winner is following at least one of Safari’s social media accounts, they’ll throw in a special bonus prize!  You can follow Safari Ltd. on Facebook, Twitter, Pinterest, YouTube, and Google+.

(The rules can be found in the giveaway widget below, but just a couple of things to note: the giveaway is open to US residents 18 years of age and above — sorry, international train fans!)