Affiliate links are included below for your convenience.

When the Little Engineer was tiny, the days turned into weeks, then months, and I never remembered to do some of the things I had planned to do with my baby.  One of those was to surround him with the music we loved in the hope that he’d love it, too.  It rarely occurred to me to take the thirty seconds to put music on while we were playing.

By the time he was two, I thought I’d missed some window with the kiddo.  While he liked playing with musical instruments and preferred listening to old school Thomas & Friends songs on his hand-me-down iPod to playing games on it, he wasn’t interested in listening to much of anything else as far as music went.

Then, when he was about two and a half, I realized I was advertising it all wrong.  No matter how much excitement I infused into the words, “Let’s listen to some classical music!” or “Tomorrow we’re going to the symphony,” they didn’t carry any meaning for him.

So, one day, we got in the car, and he asked for some Thomas music, I said, “Hey, how would you like to listen to some classical train music?”

Adding that one, magical word was all it took to get my foot in the door. But I knew I had to do more. I had to make the music itself mean something to him. I couldn’t just call it “classical train music” and then leave it at that.

I started narrating the music, weaving stories to match the tempo and mood of the music.  Higher-pitched notes became little tank engines (like Thomas and Percy) or narrow-gauge engines (prominent to Thomas fans at the moment because of their major role in the story of Blue Mountain Mystery).  Deeper, stronger tones became big and powerful coal tender engines.

The music went faster, and the engines sped up; the music slowed, and so did they. I described the time of day, the weather, the scenery. I described what they were pulling, freight cars or passenger coaches. I told him about what they were trying to do, and how they felt about it. As the music swelled, I matched it in intensity with my performance. I sold it. And I was quite glad for the privacy of the car speeding down the freeway while I did it.

And that, in and of itself, might have been enough to get him to agree to listen to the classical music station on the radio now and then. But I suspect I would have had to match that performance over and over. And over. While it was fun for me, because I do really love imagining stories to music, most of the time in the car I’d like to be able to listen to music and focus on driving.

So when the music ended, and a new piece began, I asked him, “What kind of engines are these?”

There was a pause.  I could tell it was a thoughtful one. 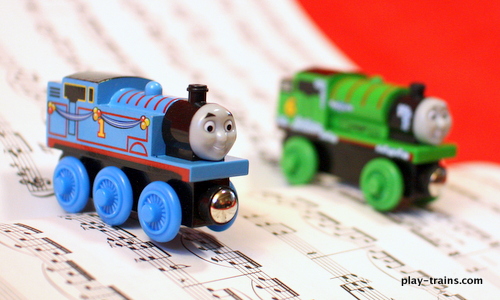 “Tank engines,” came his little voice from the back seat at last.

“Oh, I hear it!  Are there two of them?  They’re chuffing down a hill, really fast.  Maybe they’re racing.  Where are they going?”

Another pause.  Slightly shorter this time.  “Knapford Station,” he said in his high squeak of delight that I adore.  “They’re pulling freight.  They’re having a freight race!”

We kept on with it, him providing details until he ran out of them and me prompting him with descriptions I drew from the music, just enough to get him going again.  It only took a few car rides like this before I could simply ask him one question at the beginning, usually something like, “Which engines are they this time?”  Then he would just go, rolling on with his own ideas that I could only half hear, a happy background noise that makes me wish I had a microphone back there to record him.

At first, I questioned whether or not he was really coming up with the stories on his own, or just regurgitating things I had said in different combinations.  And, if he was coming up with his own ideas, was he really matching any of it to what he heard in the music?

Then one night we were leaving Grandma’s house late.  I put on the classical train music station.  Orchestral music played, nothing I recognized right away.  More and more, the music was dominated by screeching, harsh violins. Sort of like the shrieks you hear in your mind when you think of the shower scene from Psycho.  Not just sort of like them, exactly like them, because it was the soundtrack from Psycho, played on the station’s weekly movie music show.

As I started to realize what we were listening to — and contemplated switching to something else — I was also listening to the Little Engineer’s story coming from the back seat.  It was, yet again, about a little tank engine.  But this time, it also starred two diesels, Iron ‘Arry and Iron Bert, who the Little Engineer never talks about.  He’s not fond of “not nice diesels,” and Iron ‘Arry and Iron Bert haven’t undergone the reformation that Diesel 10 has in our house, from villain to baking coal cookies for Thomas in his glowing red shed. 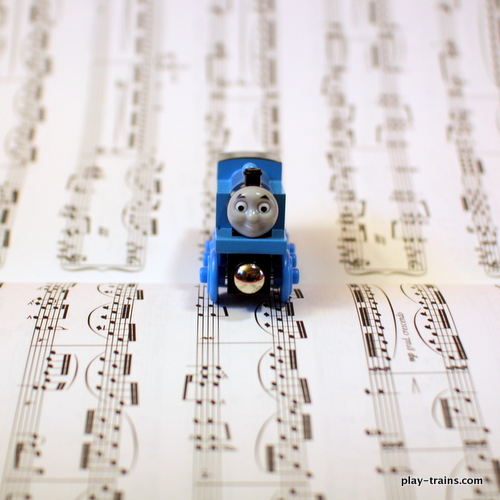 The two diesels blocked the little tank engine from its track, and the Little Engineer told me the engine was afraid of the diesels.  (At that point I started nudging him toward the engine finding a good way out of the situation by asking questions about how the engine solved this problem, so he wouldn’t get stuck in what seemed to be an uncomfortable place for him.)  And while the music ended and switched to something far more soothing before I had to decide whether or not to leave it on, and the little tank engine came out of it all right by deciding to take a different path, the Little Engineer insisted from then on that we only listen to classical train music with “no bad things” in it.

I still wouldn’t have put the soundtrack from Psycho on for him on purpose, but it did answer the question of whether he had picked up the idea of matching the action of the trains to the music.

All of this was several months ago, sometime late last summer.  Since then, he’s often been quite happy when I ask if he wants to listen to classical train music, and from time to time he’ll exclaim, “Classical train music!” as I settle into the driver’s seat.  All in all, I think it’s been a pretty successful way to get him to be interested in classical music.

This, of course, would work with anything a child loves, although some things are going to be easier to infuse with emotion and movement than others. I can see anything from “classical horse music” to “classical Cars music” working easily.  If you need some inspiration, watch Fantasia or Fantasia 2000.

It also could work with any kind of music you want to introduce to your child.  The other day, the Little Engineer wanted to hear “Train Song” by Charlie Hope.  We were halfway to my mom’s house, and Siri on my iPhone couldn’t seem to understand what I was asking for.  Finally, when “The Night Before” by the Beatles came on, I gave up.

“This is a good song,” I said, defeated and preparing myself for more complaints. “We’re going to listen to this song.”

The Little Engineer squealed from the back seat, “This is a Misty Island song!”

And off he went into storyland.  We’ve been listening to “The Night Before” on repeat a lot these past two days, thanks to the thick fog that has blanketed our area for two days straight reminding him of Misty Island.  He actually asked for “The ‘night’ song by the Beatles” this morning.  After preschool, I suggested we listen to some other songs by the Beatles, and he agreed.  It turns out that the rest of their songs are all about hamsters, not trains.  Who knew!  Although I think some of the hamsters were in hamster trains, so it was a bit of both.  He wanted to know the names of all of them as each new song played, so hopefully I’ll be able to decode it if he asks for one of them next time we’re in the car.

Between the Beatles and all the classical train music, I’m not so worried about failing him when it comes to introducing good music at a young age.  Got that covered.

If anyone tries this, I would love to hear how it goes!  Here are a couple of ideas to get you started.  Let me know if you’d like me to do a few more.

This is a great one in the car, driving at twilight.  At the beginning, you can almost hear the wheels rolling on and on, smoothly over the track.  I see the island of Sodor under a purple sky, clouds highlighted with bright streaks of sunset:  yellow, orange, pink so vivid it’s almost red.  Thomas is racing across the island to Tidmouth in the west, chasing the sunset, his coaches Annie and Clarabel following behind, empty, light, their eyes getting sleepy.  They are all tired, all three of them, but filled with the satisfaction of doing their best at every task that day.  They go up Gordon’s Hill, and somewhere around one minute, forty-five seconds into my recording, there’s a great place to have Thomas crest the hill and see the land laid out before him, with Tidmouth Sheds and the promise of seeing his friends and finally resting.

The Little Engineer took over this one — it was possibly the moment when I realized he no longer needed help getting started imagining things to the music.  But it was great, and easy to think of ideas for (even if he didn’t need my ideas), so I highly recommend it for when you’re starting out.  You have two options here, circus train or zoo train, and the title of each part of the music tells you what kind of animal is in each car.  Not that the Little Engineer felt like following the composer’s ideas…I think all the cars had monkeys in them!  Monkeys and giraffes, if memory serves me.  So you can of course go with whatever you imagine.