I have this theory that trains can be used to teach any subject.  This seems especially true for math.  I keep thinking up new train math games myself, finding new commercial train games with a math element, and running into new ideas online.

But there is one and only one train math game that has stood the test of time at our house (going on a year now), and the Little Engineer calls it “Dice Cars!”  I thought of giving it a more obviously train-related name for this post, but I’m too fond of hearing my son shout, “Meekat, play Dice Cars!”  (And it makes plenty of sense given the “cars” refers to “freight cars.”) 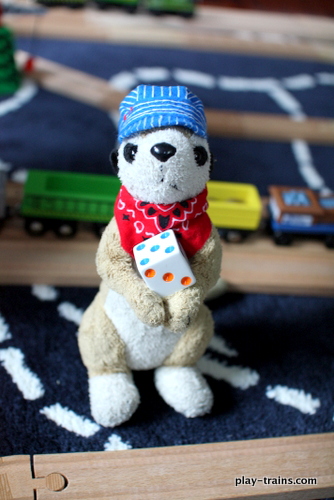 He really has been shouting that for a year now.  Not non-stop, thank goodness, but we keep coming back to Dice Cars.   I think there are two main reasons for this.  First, the game involves a lot of the same things he loves to do when he’s just playing trains normally:  coupling and uncoupling cars from an engine, loading and unloading freight, and driving his train around the track.

The dice themselves add an appealing tactile, aural, and visual element as well.  They make excellent freight, and his latest thing he likes to do on his own is lining them up in a row at the side of the track, sorted by size and type, and counting them.  We especially love the large, white dice with multicolored dots we found at a local toy store; they’re easy for a beginner to read and cheerful.  Meekat can even hold the dice and “roll” them on his turn, which adds to the fun. 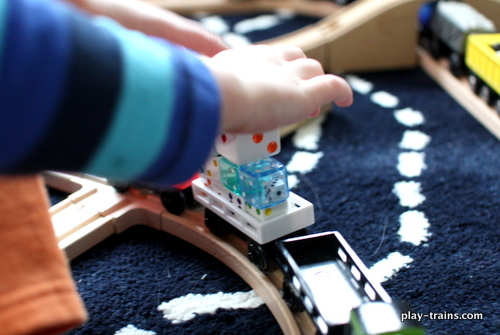 The second reason I think this game has interested him for so long is there are many ways to alter it to make it more difficult, or more exciting.  At its most basic, Dice Cars involves each player having a die, an engine, and six freight cars or passenger coaches.  (It could also be played with six engines, or six of whatever combination of rolling stock you have, or engines made out of paper or cardboard if you don’t have enough toy trains.)

On your turn, you roll the die, and couple up your engine to that number of cars.  Here, Meekat rolled a three, and attached three freight cars to Sir Handel. 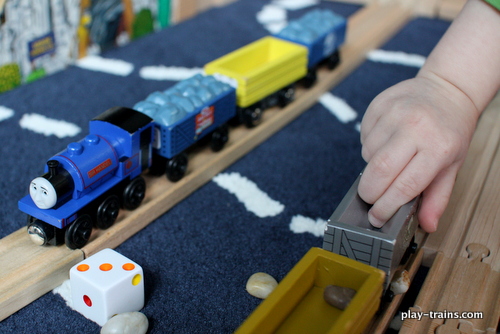 On his turn, the Little Engineer rolled a five, so Thomas is now pulling five freight cars. 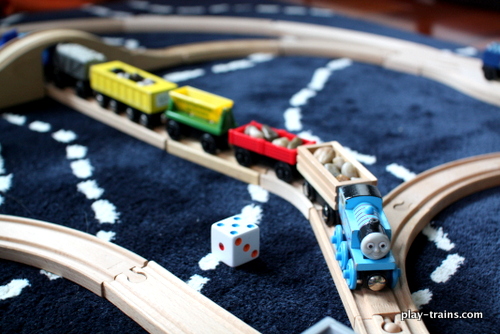 Back to Meekat again, and he rolled a two. 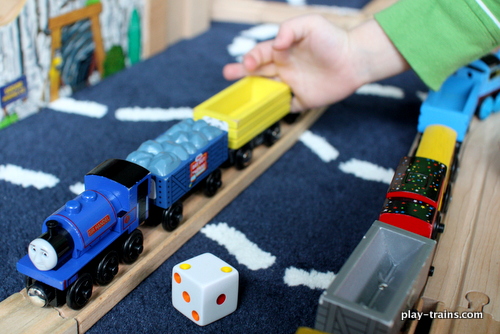 The Little Engineer helped his friend uncouple one of the cars (Meekat thinks it’s pretty awesome having a best friend with opposable thumbs), and now Sir Handel is pulling two cars. 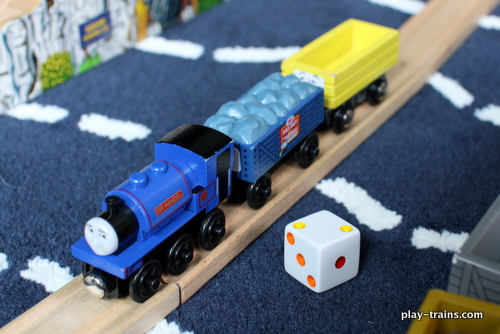 At first, we played it in that simple way.  Once the Little Engineer and Meekat were good at identifying the numbers on the dice, we started talking about how many more or less the new amount was, counting the cars we were leaving behind, that sort of thing.  The trick here is to talk about the math concepts in a “train yard” sort of way — that’s why I play Dice Cars as Meekat, and not as myself.  He makes the number talk sound like…well, like an overly-enthusiastic, train-loving meerkat’s idea of what real railroad workers would say in a freight yard.  If I talk about it, it sounds more like a math lesson.  Both the Little Engineer and I prefer Meekat’s version.

Before I get to some of the slightly more advanced forms of the game that the Little Engineer is starting to be interested in, we should talk about the excitement factor.  One thing we enjoy doing is simply chuffing the trains around the track after each turn, or using battery-operated engines and turning them on for a moment before stopping them and rolling again.  It keeps the activity from seeming too forced by breaking up the thinking parts.  The Little Engineer now usually goes for full-on pretend play and brings his engines back to the freight yard or the docks to play with a bit before rolling his die again.

For additional excitement — and the possibility to extend the discussion into the realm of physics — start each turn at the top of a slope, preferably a very high one, with a length of straight track at the bottom.

Roll your die, attach your cars, and make predictions on whether or not your engine will make it down the mountain without derailing or crashing.

The fun thing about this is the result changes depending on which engine you use, which and how many freight cars are coupled up, whether or not they’re loaded with freight, and how straight your slope and the track beyond it are.  Some engines are so light that they need several cars behind them to stay upright on a somewhat crooked track, and some engines and cars are so solid and heavy they have too much speed to slow down before the inevitable turn at the edge of the layout. 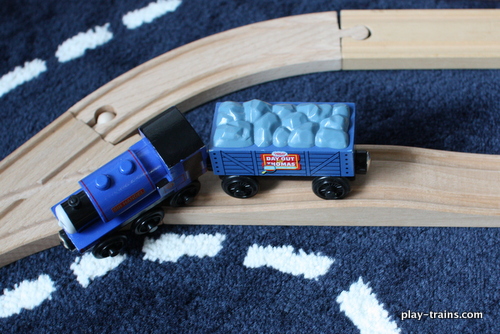 Derailed!  I was hoping for a more spectacular crash to photograph, but we were playing a collapsing block bridge game at the top of the mountain, and we didn’t get too many chances to send our trains down between bridge rebuilding sessions. 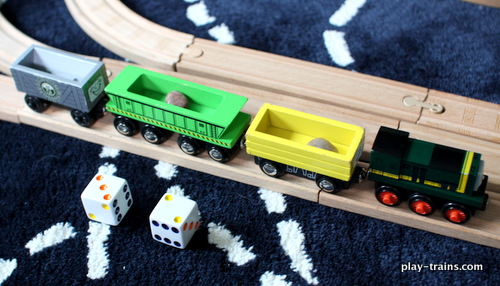 The second variation connects to multiplication. Have the first die decide the number of cars, and the second die determine how many pieces of freight to put in each of the cars. 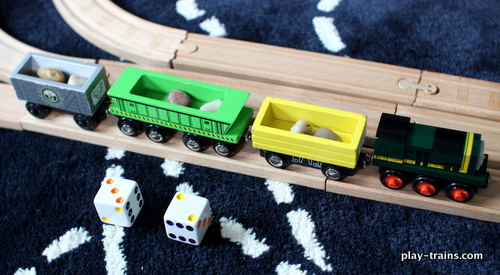 There are certainly more possibilities for Dice Cars, including (if you have a geek in the family, and additional the freight cars and/or pieces of freight) breaking out dice with larger numbers.  I think that might be next for us…the Little Engineer does love his dada’s dice bag.  Or maybe we’ll do a “live action” version of Sid Meier’s Railroads (in which you can add up to eight total passenger, mail, and/or freight cars to each engine) and roll a die for each of several different types of cars…

No, I don’t see us running out of new ideas for Dice Cars any time soon, but let me know if you come up with a good one of your own.  We’d love to play it! 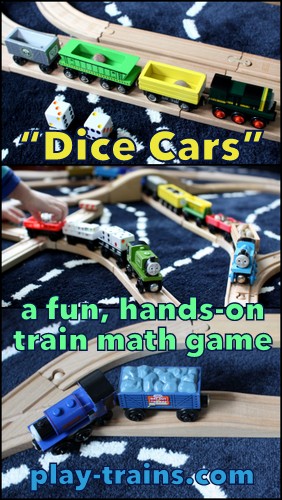