We went to the 38th Annual Model Railroad Show on the last day it was at the Pacific Science Center this year, January 16th.  The day after this year’s big snow storm.  Fortunately, we were able to ride a train there, and it was well worth braving the cold weather.

This is a wonderful train show to take children to, even young children.  If they’re not content to just watch model trains rolling along, there’s enough train-related stuff to do to keep a little kid enthralled until you’re ready to drag them home. 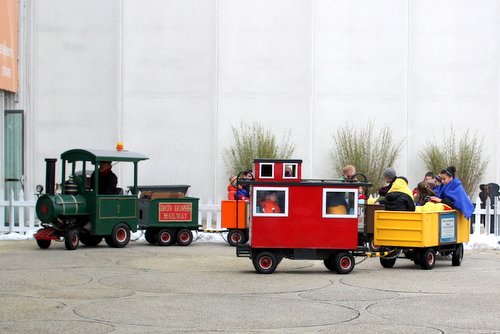 The first and last thing we did at the train show was ride the “big” train they had out in the courtyard.  It was really cold, but that didn’t deter the Little Engineer for begging for a second ride.  You see, he’d wanted to ride in the caboose, and it was an injustice that he’d ended up in an open passenger car before he could consider his options.

So, shivering and ready to get out of the cold, we promised we’d ride again when we were leaving the train show. The problem was that the caboose isn’t really meant for adults to ride in, and the Little Engineer was too little to go on his own.  Somehow, I wedged myself in.  There was just enough room in the cupola for my head, so I could sit up straight. 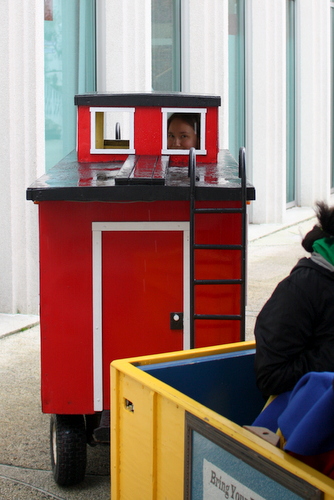 Yes, an adult can squeeze in there...

The main attraction, of course, are the large collaborative layouts with model trains zipping and zooming around them.  I got a few great shots thanks to the guys running the exhibits letting me get behind the ropes and take a few close ups.  We were of course most excited about the Thomas and Friends engines, but I also really enjoyed the model Sounder, our local intercity commuter train. 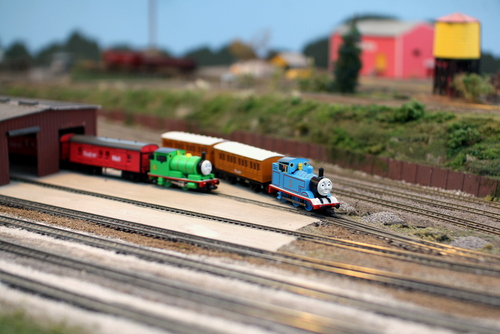 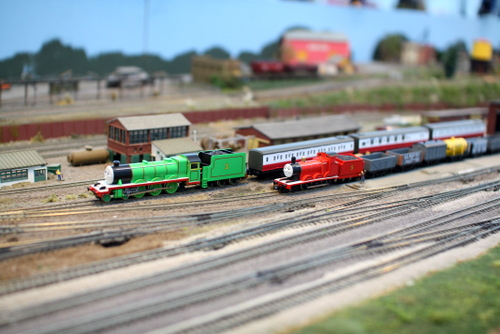 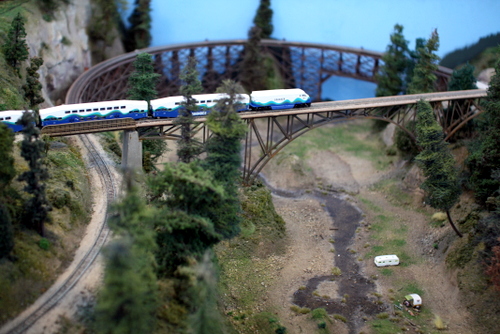 Given that this show was at the Pacific Science Center, there were plenty of activities for kids.   The highlight for the Little Engineer was the wooden train table.  We walked around the corner and there it was, glowing under the lights and swarming with intensely-focused children.  It turned out that the table was set up by the family behind wTrak, a brilliant modular train table system. 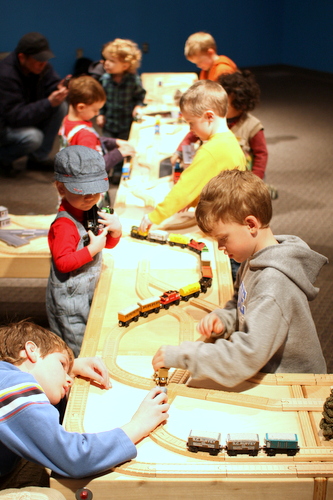 Wow, right?  Hopefully you can see in the photo how it’s a number of small tables that can be configured in all sorts of different combinations.

Part of what made the tables so special to the Little Engineer was the collection of trains they brought with them, including a number of retired and collector’s models.  Given that he has several different Thomas Wooden Railway Yearbooks memorized, he was overjoyed to finally meet some of these engines in person. 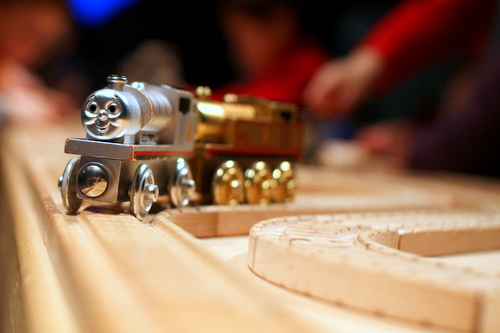 The wTrak people were very efficient at collecting unattended trains from the track and putting them where the next wave of children could find and play with them.  Almost as efficient as the Little Engineer was at making “collections” of all these precious engines right in the middle of the tracks.  He’d go off to find more and come back to discover his collection had been returned!  I tried not to laugh out loud watching this happen several times in a row. 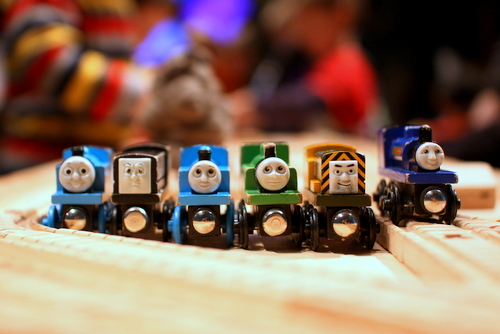 One of the Little Engineer's "collections" he made on the train tables.

There was also an extremely cool display of custom-made Lego Thomas trains put on by City Blocks from Tacoma.  The display was surrounded by tables of Legos to build with, and Duplo trains on the floor behind them for the younger kids to play with.  The Little Engineer, of course, wanted to play with the “teeny tiny Legos,” but we redirected him to the Duplos. 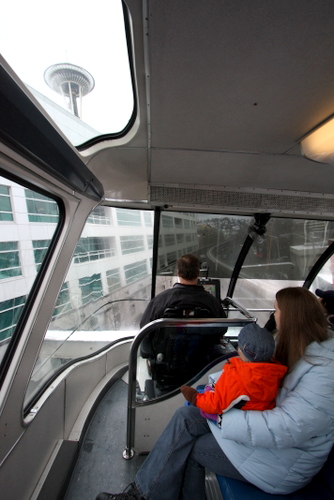 No trip to the Science Center would be complete for us without a ride on the Monorail.

It was difficult getting our kiddo to leave, but the promise of two train rides helped a lot.  What a magical day!  We’re looking forward to going again next year.