Every day, the Little Engineer wakes up with a plan for the day, a plan he strives to stick to.  Generally, ninety-five percent of it is “play trains!”  Play wooden trains indoors, that is.  I know he really enjoys being outside–he’s remapped his grandparents’ entire backyard as the Island of Sodor, and can run around pretending to be Thomas there for as long as someone is willing to play with him–but for some reason, he gets bored with our yard quickly.

That makes getting him outside when we’re at home tough, especially considering he’s not keen on the rainy weather here.  We have some metal Take and Play and plastic Trackmaster trains to play with outside, but that feels like cheating even if it does get him some fresh air.  I’ve been trying to come up with new ways to encourage more outdoor, gross motor play for quite awhile, but nothing’s really sparked his interest for long.

Then over Memorial Day weekend, I was staring at our overgrown backyard, and I had an idea.  As the Little Engineer calls them, “Grass Tracks!” 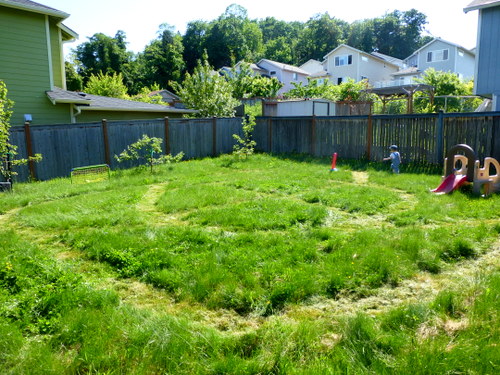 Chuffing around the Island of Sodor

The Little Engineer has been asking to go outside early in the day almost every day this week.  He runs and runs, narrating his adventures the whole time.  Of course, I’m expected to run, too.  Which is about the only thing that could ever have gotten me to take up running.  I’m not in shape for it, so my running doesn’t last as long as his does at this point.

Fortunately, my default character is Hiro.  Very early on in his train collecting I bought a Patchwork Hiro (I thought it was pretty) and he was suspicious of the way the wheels were attached, so I told him it was Mama’s train.  That made the scary wheels okay and led to Hiro being called “Mama Train” long after the Little Engineer was pronouncing names like “Murdoch” and “Ferdinand” with ease.  So, Mama still gets to be Hiro.

The fortunate part about that is Hiro spends the better part of Hero of the Rails broken down and hiding on an overgrown siding.  So once I get tired, I convince my “Thomas” to let me sit down in Hiro’s Hideout (the grass behind the climber in the photos) while he brings parts to repair me, one by one.  And thus I get to rest until I’m ready to run again. 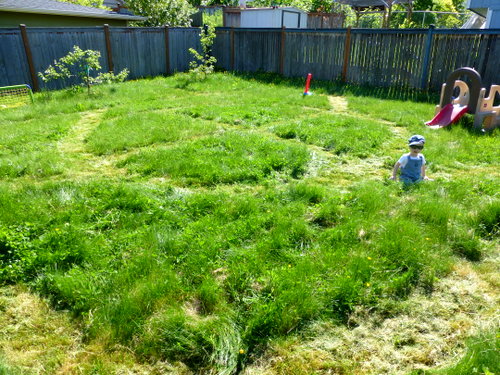 Waiting for the crane engine to put him back on track

The Little Engineer has come up with some fun games to play on the Grass Tracks.  One of them is, predictably, “Crash!”  His version involves running up to me, giggling and shouting “Crash!” and hugging my knees for a moment before running off again.  I don’t exactly mind it.  He also likes to derail himself by falling down next to a track and have me come pretend to be Rocky, a crane engine, and set his wheels back on track.  We’ve also kicked a ball along the tracks, pretending we’re shunting a freight car.

Obviously, you don’t need to let your yard grow this ridiculously long to mow tracks into it.  Just mow it a normal length, then adjust the blade so that the tracks are cropped noticeably closer to the ground.  You can’t see this, but we also mowed a straight line outward from the outside track in the opposite corner to be a “shed,” and next time I get my husband to do this, I’ll request more “stalls” for the shed because that’s been a hit as well.