These vibrant oil and water discovery bottles contain no lamp oil, using all edible ingredients. This makes them a safe science activity for preschoolers to make on their own! We found some fun train-related things to include in our bottle, but you could make them with any (or no) theme in mind.

The Little Engineer enjoyed creating this discovery bottle so much, he asked me to wash all the parts and let him do it all over again. So we have two levels of coloring to show you: light and BRIGHT.

If you’ve ever dripped food coloring into oil before, you’ll remember the beautiful, jewel-like drops of color floating separate in the oil. This is because oil and water truly don’t mix. If you shake them up, they emulsify, but eventually separate back into oil and water.

That’s simple kitchen science — think salad dressings — and something I knew well from my culinary background. But somehow, the first time the Little Engineer and I tried to make an oil and water discovery bottle last year, I expected to be able to color the oil. Of course, I immediately realized why the food coloring just floated in the oil, but I should have known before I tried it. 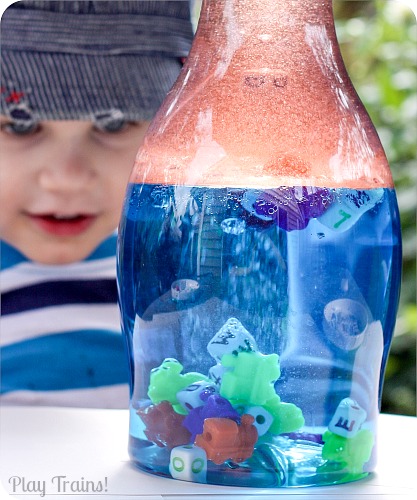 What really surprised me, though, is that it took me another year before I realized how I could color the oil.  I’ve had the secret ingredient in my house all along!

When coloring white chocolate (or fake white chocolate “coating chocolate”), you have to use either a powdered pigment or an oil-based food coloring. Thanks to Wilton’s candy melt line, these “candy colors” are available at any big chain craft store. They come in a set of primary colors or garden colors. We used the pink from the garden colors set for our bottles. 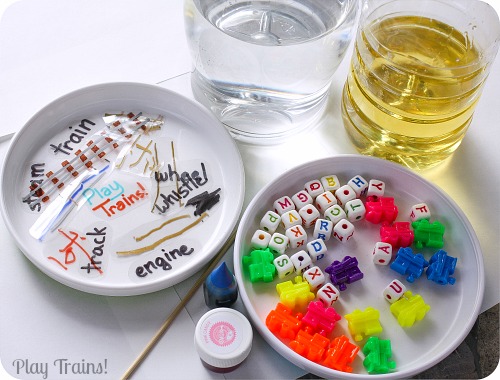 First, I had the Little Engineer add one or two drops of food coloring to the bottle of water. (This is a great way to practice self control, because it’s so tempting to give those tiny bottles a good squeeze!) 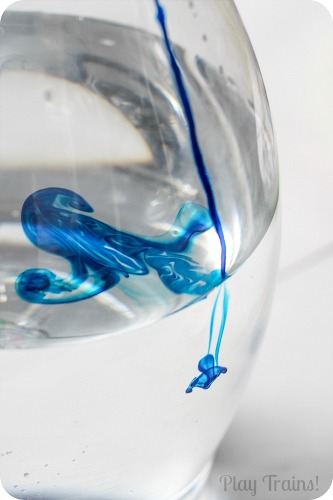 Next, he shook up the bottle. You can tell how much he got into this by that face! 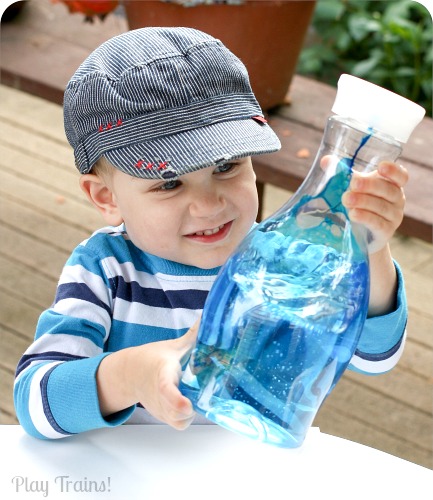 We set the water bottle aside and opened the oil bottle. I had him stick the pointy end of the skewer down in through the foil seal on the candy color container and swirl it around a couple times to pick up some of the coloring. Then he stirred oil with the end of the skewer. 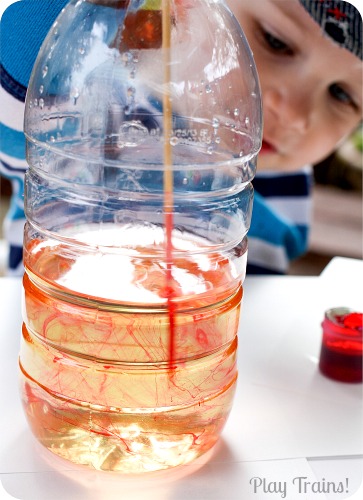 When most of the coloring was transferred from the skewer to the oil, the color was still a little light, but the Little Engineer didn’t want to go along with my suggestion to add more color. So we put the cap on the oil bottle and shook it, to make sure the coloring was mixed in with the oil as well as possible. Then it was time to pour the oil into the water. 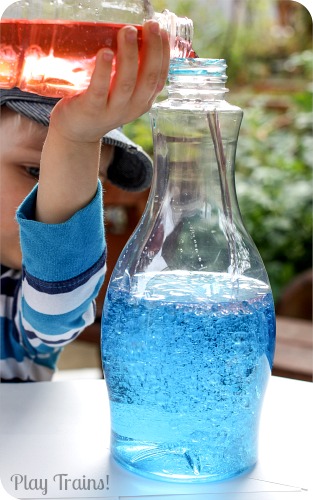 It made the most beautiful pink bubbles floating on top of the blue water. 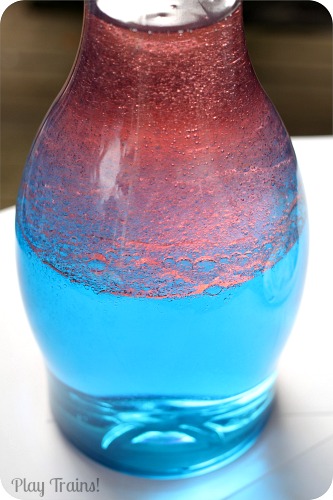 The Little Engineer admired it for a bit, and then started adding alphabet and train beads. 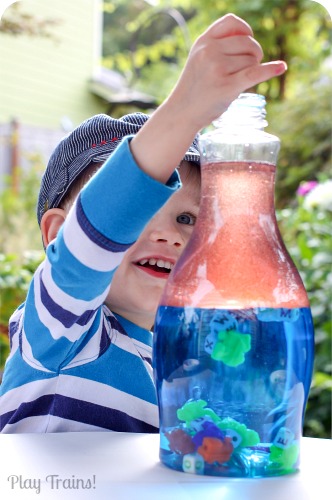 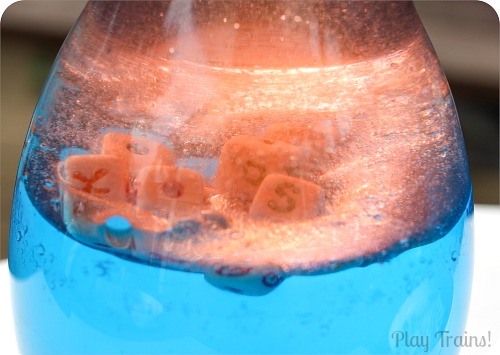 …and then floated in oil-bound clumps to the bottom. 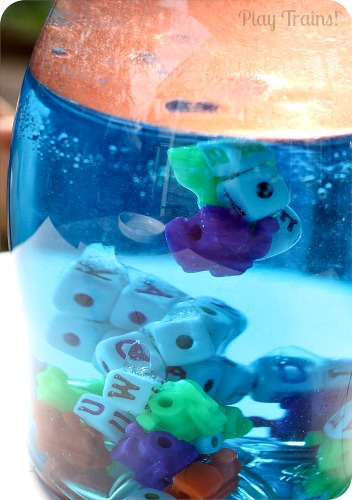 Once all of the beads were added, he added the waterproof words. This was the exact moment when I was inspired to make the word discovery bottles: 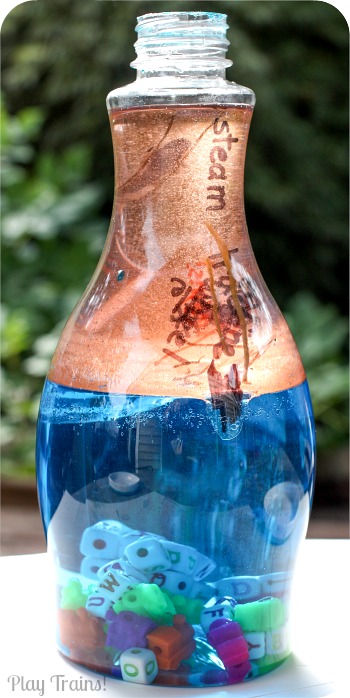 The oil is a great addition to the word bottles, because it helps the words stay afloat in the bottles without constant shaking. 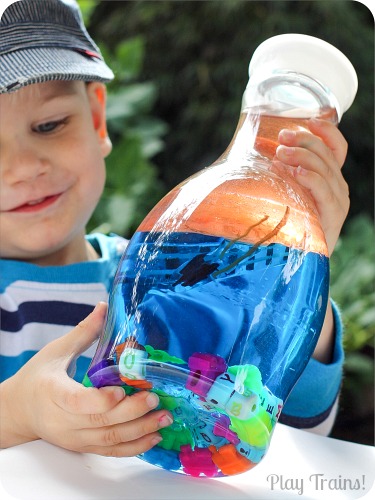 Once we’d capped the bottle — and the Little Engineer had properly admired his work — I encouraged him to try shaking up the bottle. It created an amazing ombre effect, running from peach to sea foam green to blue. 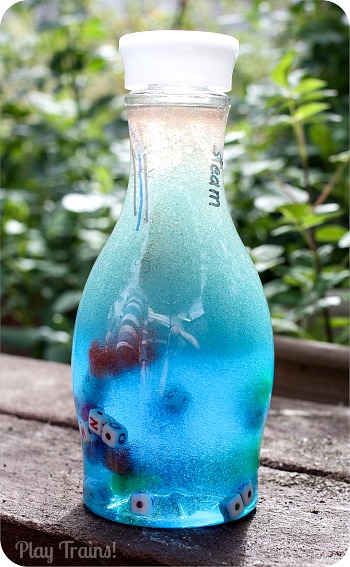 But that also demonstrates one of the downfalls of the oil-based coloring: eventually, it does fall out of the oil and into the water. Which is slightly disappointing if you’re looking to make a long-term discovery bottle. But it also presents an opportunity for some additional questions: why does the oil-based food coloring also mix with the water? Why doesn’t it go the other way, with the water-based food coloring eventually mixing with the oil?

One way to keep color in the oil for as long as possible is to make it really bright to begin with. So when the Little Engineer wanted to make a second discovery bottle, I poured an extra splash of the candy color into the oil. And got this: 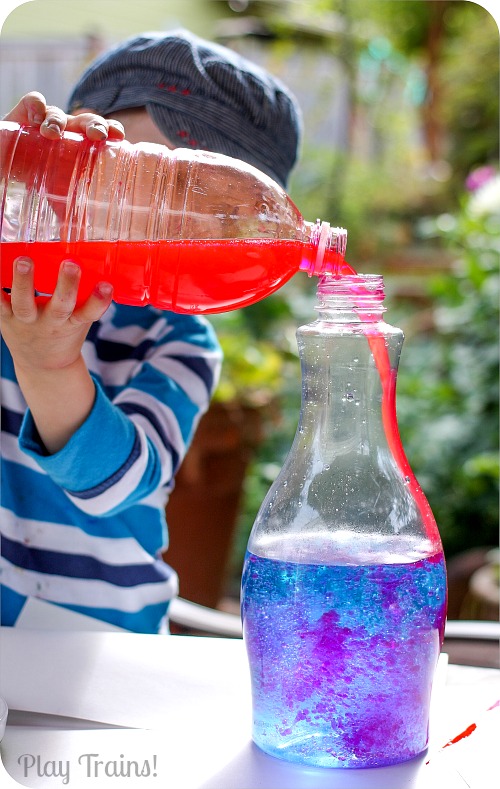 WHOA, right? That’s truly the color it was in person, too. Those candy colors are crazy bright! 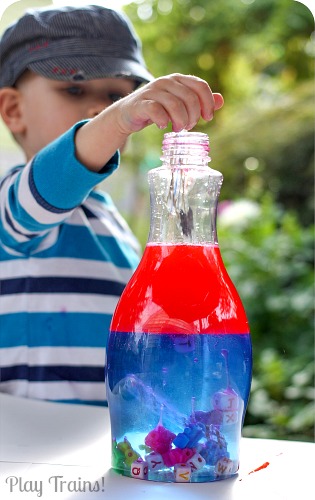 Once again, he had a great time adding the beads and words to the bottle. At one point, when I was taking a picture of the bottle, I heard him making letter sounds to himself, and turned around to see him sounding out the word, “train.” 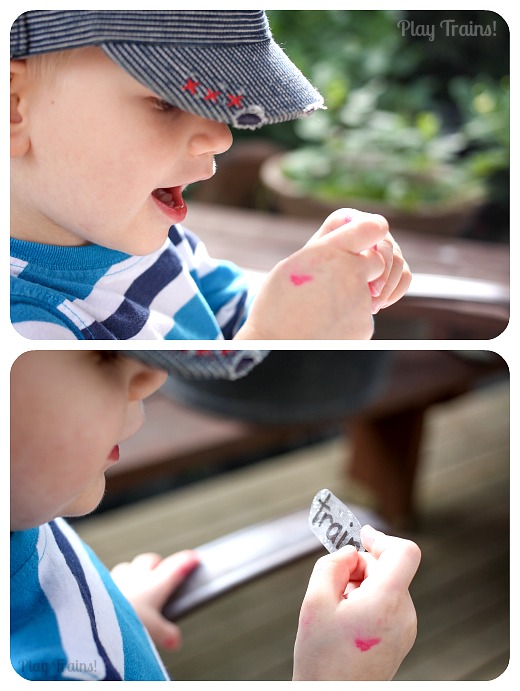 When you shake up the bottle, once again the oil-based color starts to mix with the water, in our case turning the water from blue to a dark purple. But the oil was still really brightly-colored. 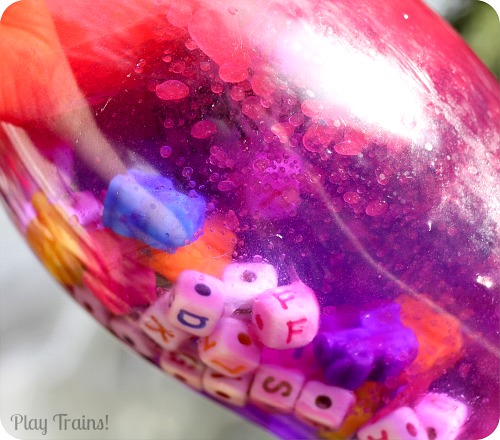 I hope this oil coloring tip will help you with discovery bottles, or any other oily substance you’d like to color. However, a warning: this stuff stains! The Little Engineer was pretty neat, so for us this was limited to a few red streaks on his hands that lasted a couple of days, and a pink cast to some of the alphabet beads that sat in the oil for awhile. Definitely not a project to do with kids dressed in their nicest clothes, no matter how careful they tend to be. Also, while the food coloring is edible, I certainly wouldn’t want my kid consuming it intentionally.

Make sure to check out our Floating Word Discovery Bottle to see how to make the waterproof words (and train tracks) with your kids! 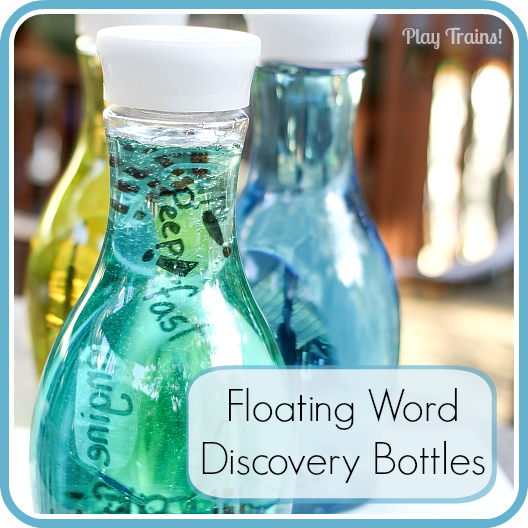 You can also find more science activities at our other blog, Epic Fun for Kids: 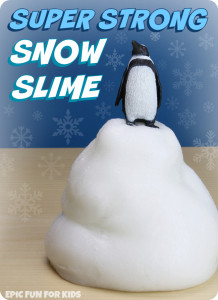 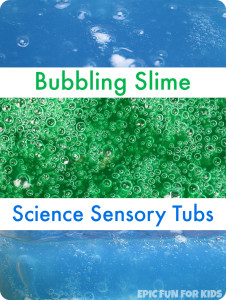