“Big Engine” is the Little Engineer’s bed.  When we picked the Kura bed out at Ikea almost a year and a half ago (can it be that long?), I didn’t realize that it really was a train.

Not that trains didn’t influence us in choosing it;  I had visions of putting track up around the top rail (later, I came across another family who had that same idea).  But the Little Engineer really liked the starry bed tent.  That gets in the way of the track, so sometimes we have track up there, and sometimes we have Big Engine’s boiler. Not that the boiler (or this specific bed, for that matter) is necessary. We still play Big Engine now, even though the bed tent is down in favor of track.

One of the best things about Big Engine is all the different kinds of play it draws in around one central theme. It involves a lot of different minigames, I guess you could call them, far more than I could fit in one post. So here are the ones the Little Engineer originally imagined. 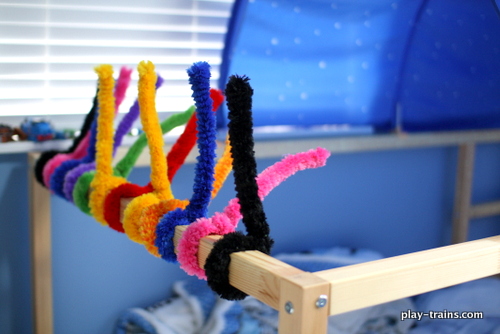 Here is Big Engine’s cab. We use these Brain Noodles giant pipe cleaners, hooked around the railing loosely enough to move, but tight enough to hold their position when he lets go. 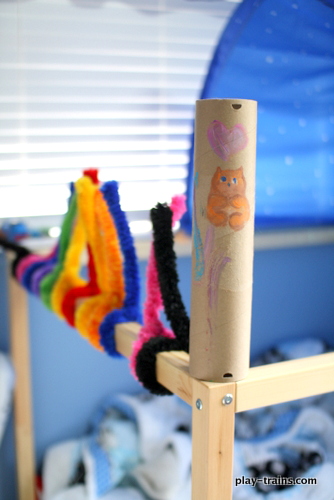 Levers and the funnel

We have a couple of different sturdy cardboard tubes that get used as funnels.  They also get used as toy hamster tubes.  Not at the same time, though.

The funnel, balanced here, falls down a lot. You would think this would be a problem, but the Little Engineer enjoys replacing it. Sometimes we put twisted giant pipe cleaners coming out the top, like steam. 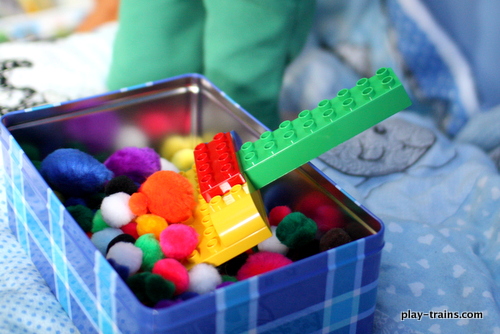 Here’s Big Engine’s coal bin, complete with a fireman’s shovel built from Duplo blocks.  I bought one bag of black pom poms for coal, but we ended up mixing it with the multicolor ones we already had — more fun that way!  There’s a space between his mattress and the wall where we can take out the rolled up towels filling in the gap.  We line that with a quilt, and that becomes the firebox. 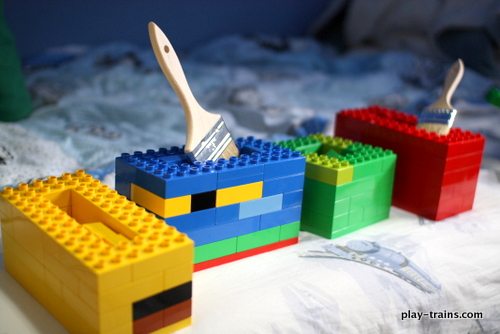 Now, every good engineer knows that it’s important to keep an engine in top form at all times.  Big Engine gets repainted several times a day, and we use a velvety cloth wipe from the Little Engineer’s baby days to polish all the brass. 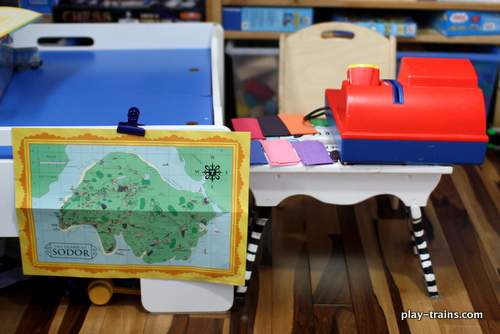 Big Engine most often pulls passenger coaches. And of course a passenger station needs a ticket booth. Ours is set up with a cash register, color-coded tickets for the different stations around Sodor, and a map of the Island of Sodor that we got in the very cool My Journey with Thomas the Tank Engine. 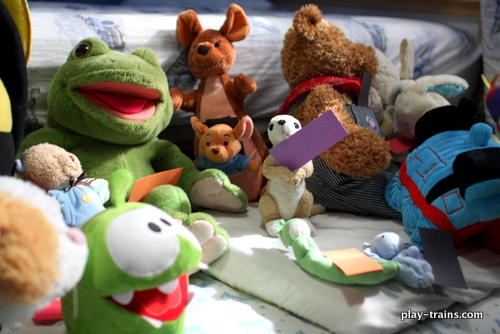 The passengers waiting on the platform

Each of the passengers comes up to the counter, and the Little Engineer helps them choose a station to travel to on the map and sells them the appropriately-colored ticket. Then they wait on the platform for the exciting moment when the train arrives! 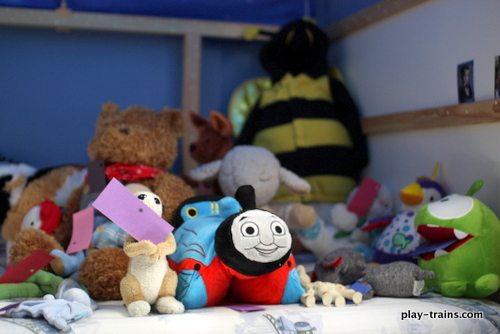 The passengers on board, with their tickets punched

Once the passengers have boarded the train, the conductor (sometimes that’s me, sometimes it’s the Little Engineer) calls out, “Tickets, please! Tickets, please!” (That part is extremely important.) We punch the tickets with the same punches we use for our bedtime tickets and hand them back to the passengers.

At which point, the Little Engineer drives the train for a short time, dropping off passengers, while Meekat, his stuffed meerkat, plays fireman and shovels coal. And then we start selling tickets all over again.

We’ve come up with many more ideas for and variations on Big Engine in the time since I took these photos, so look for them in the near future!