Do you need a train table? The best decision regarding whether a train table is worth the cost and the space will be different for every family and school. So let’s go through the pros and cons of train tables, things I’ve learned through lots of experience and through talking with other parents and Play Trains! readers. 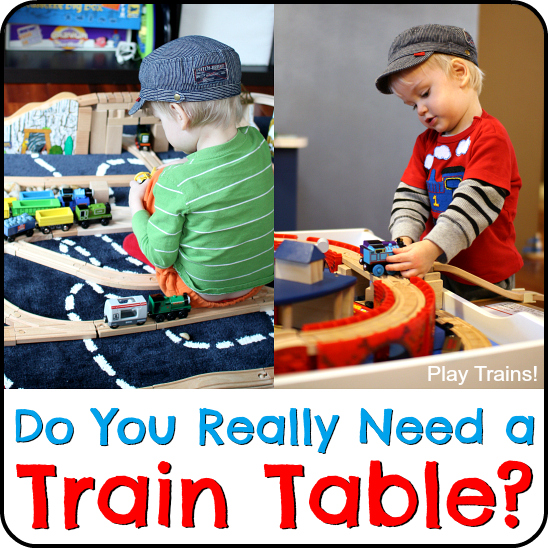 Train Tables in the Home

Many children first discover wooden trains through train tables set up at bookstores and toy stores. Parents often see the magic that happens at these train tables and assume the tables have as much to do with that magic as the trains themselves. And when they buy that first wooden train set for their children, many parents pair it with a train table, wanting to reproduce that magic at home.

But here’s the thing. A train table at a bookstore is a very different thing than a train table in your own home. I’ve heard from more than one parent who was surprised and disappointed to find that their child — who was so entranced by the train tables at the store — was uninterested in a train table received as a birthday or Christmas gift. (If this happens to you, try taking the trains off the table and putting them on the floor, and see what happens.)

However, some families love their train tables, and think they’re worth every cent they paid for them — and every square inch of floor space they take up!

My own experience has been somewhere between those two extremes. In our house, the train table worked best as a novelty. Every once in a while, I would set up a train layout on the table, and it would be new and exciting…for an afternoon or two. But mostly we prefer to play trains on the floor, where we aren’t limited by space. And, being a horizontal surface, from time to time the train table would start to get buried in other stuff without me really noticing. This year, I had my husband add height to the table, and now we use it as a LEGO table — it gets much more use this way, although as I’m typing this, I know it’s currently in a buried-under-stuff phase. (We’ll have to fix that later!) So while I don’t think we needed the train table, I’m kind of glad we have it.

Ultimately, the decision to bring a train table into the home is going to depend on several factors, so let’s go through the pros and cons:

Train tables make the most sense to me in a public setting. It would be impractical to have trains strewn across the floor at a bookstore, toy store, dentist’s office, children’s museum, train show, or similar location. Most of the time, the tracks on these tables will be glued down, too, and in this case I can’t argue with that. In these public spaces, the train tables are there to entertain the children more than to provide them with a learn-through-play experience.

But at a school, I think skipping the train table — or rotating the trains away from it from time to time — is something to at least consider. Wooden trains and tracks are a wonderful addition to a block or building center. We’ve often repurposed the tracks as building materials, building tall block towers with tracks between them.

Also, when the Little Engineer was in preschool as a 2-year-old, there was a great deal of drama at the train table, and I’ve long suspected that if the tracks and train play hadn’t been confined to that table, the kids who were having trouble finding a way to play beside each other could have spread out and gotten a bit of breathing room.

However, the train table provides a nice space for kids to play with loose items off the floor. And as I mentioned above, wooden trains could be rotated from the table to the block center to mix things up. So the table is probably a good idea in a school, but if your classroom doesn’t have room for a train table, you don’t need one to have trains available to the students.

If you’ve read this and feel that getting a train table is the best decision for you, I have a list of the best wooden train tables for toddlers and preschoolers. I’ve done my best to compare the brands and offer my thoughts on all the options I was able to find, and I hope it will be helpful in your search for the perfect train table. 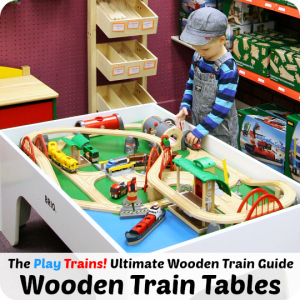 This guide will be expanded with time. Have a question I didn’t answer? Ask in the comments below or by email!