When I talk to the Little Engineer about how this is “our train blog,” those are not just empty words.  I try to involve him in every aspect of the blog that I can.  When he looks over my shoulder and sees Google Analytics up on my browser, he asks, “How many people came to our train blog today?” and then, “What posts did they look at?”  We check that out together, practicing reading numbers and words, and usually visiting some of the posts and reliving all the fun we had.  Often that leads to us doing activities again.

But there’s another reason why this is most definitely “our train blog”:  half of the ideas I write about come from the Little Engineer himself!  This activity was very much his invention.  At times, I asked questions to draw the ideas out, but he was pretty clear on how this was going to go from the moment he asked to play it. 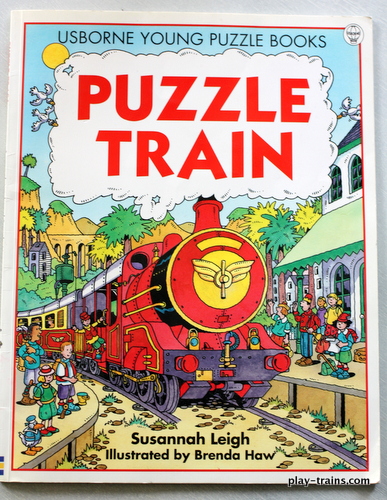 The activity was inspired by his new favorite book, Puzzle Train by Susannah Leigh.  It seems to be out of print, but fortunately you can easily get it from third-party sellers on Amazon, like we did.

Inside, each two-page spread advances the story of Alex, a boy who wants to grow up to be an engine driver (sound like anyone?).  Alex gets to help out on a steam train and solve all the problems that arise for the engine and its crew.  There are also things to find on the pages, including different pieces of train gear, the pet crow who belongs to the crew of the rival steam engine (the Little Engineer loves Caw!…or so he keeps shouting every time we see him in the book), and blue rabbits.  Not sure why they’re blue, other than they blend into the rocks that way!

The Little Engineer’s favorite puzzle is the part where Alex must figure out which passengers have the wrong tickets.  First we read the ticket chart, and then I ask him about each group of passengers.  He has the ticket chart memorized now, so he can quickly give me the right answers on his own at this point.

So, after a couple of weeks of reading the book, he told me he wanted to play “actual Puzzle Train” and sort out the passengers’ mixed up tickets.  I told him I’d be happy to play, and asked how it was going to work.  We needed tickets and a ticket chart, he said, so we got to work on those.

I cut eight pieces of construction paper in different colors into rectangles, resembling the solid-color tickets in the book.  It was very important to the Little Engineer that there be black tickets for Caw, who was going to be played by his best buddy, Meekat.  So I cut up the black paper first.

Once we had eight piles of colorful tickets, we made the ticket chart.  The one in the book has colored rectangles to represent the different tickets, labelled so you know which tickets are for what kind of passengers.  The Little Engineer has been resistant to even trying to draw rectangles, so I felt very clever to finally figure out a way to explain to him — using trains! — how draw them.  (Watch for a post about teaching kids who love trains about rectangles to find out what worked for us!) 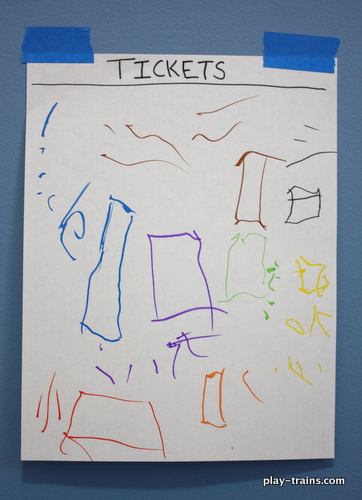 He ended up drawing a lot of rectangles, as you can see, and we were both extremely proud of that ticket chart.  I reminded him to write who each color of ticket was for as he drew the rectangles.  In retrospect, I should have been writing that information down as well.  We taped the ticket sign on the wall of what would become the passenger coach, and then we set up our ticket booth, similar to what we did for the Big Engine and Monorail Ticket Booth pretend play scenarios. 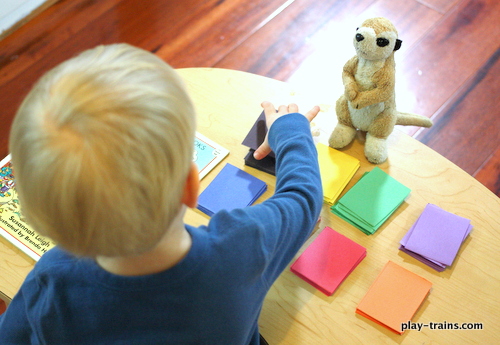 Meekat got into character as the pet crow, Caw.  The Little Engineer started to hand Meekat — I mean, Caw — a black ticket, but I reminded him that the fun part of the puzzle in the book was that the tickets were mixed up, so he could sort them out later and make sure all the passengers had the right tickets. 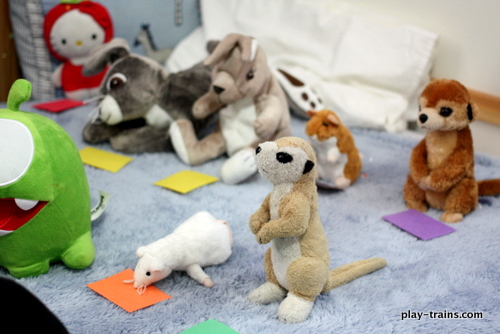 So Meekat got a green one, and the other animals also got the wrong tickets.  At least, I assume they did, because I had forgotten what he’d said the different colors were for by then!

Big Engine became Puzzle Train and pulled into our bedroom station.  The Little Engineer climbed on board.  The first thing he did was to get back down and run to another room to get a keyboard we let him play with to be his “ticket computer.”  Then he gathered up all the tickets from the passengers in a little pile. 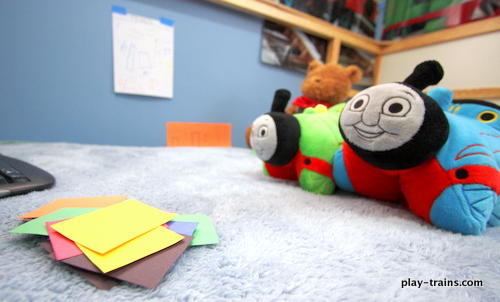 Next, he spent several purposeful minutes typing on the ticket computer and consulting the ticket chart. 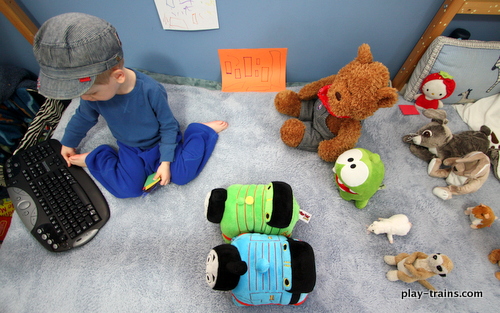 Finally, he handed the tickets back to the correct passengers. 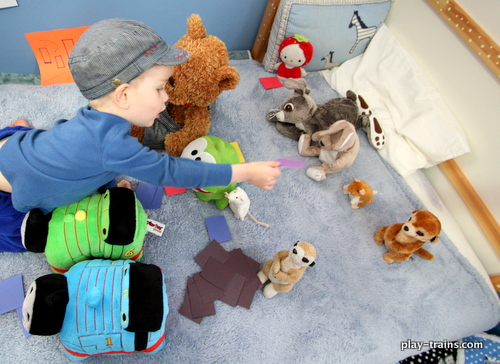 For some reason, Meekat/Caw got the entire stack of black tickets.  I guess the Little Engineer wanted him to stay on board for several train rides!

I let the Little Engineer take the lead on how to play this out.  It was his game, after all, and I could hardly help him sort the tickets out according to the chart when I couldn’t remember what he’d “written.”  But I do have some ideas for making this activity more challenging in the future:

There are many other puzzles in the book that the Little Engineer would enjoy playing “actual” versions of, so I will most likely be posting more activities inspired by this book in the near future. 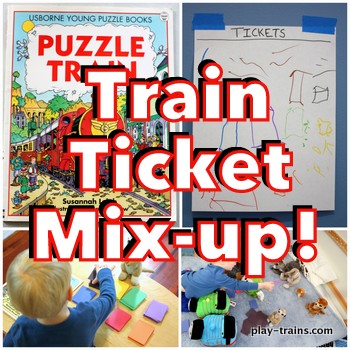 « The Sunday Semaphore #1
Gardening with My Little Engineer »