We haven’t gotten any snow yet this year, much to the Little Engineer’s disappointment.  But that hasn’t stopped us from playing trains in the snow all winter.

We’ve combined snow and trains in our play off and on through every season.  It’s always a popular element.  It taps into one of the things that’s so great about playing with trains:  their main purpose is being — to borrow an over-used phrase from Sir Topham and his engines — “really useful”.  Not going fast, as fun as it is.  Doing practical, helpful work. The easiest way to play this out with toy trains is to have them deliver passengers and freight to their destinations, but plowing snow off of the tracks is a very different way of giving an engine a purpose.  In addition, there are different sensory experiences that come with some the different kinds of “snow” I suggest below.  I especially like that you can bring the idea of making the tracks safe for other engines into the story, drawing on another thing I love about playing with anthropomorphic engines in particular:  the opportunity to develop empathy and other social skills.

So, with that in mind, here are some of our favorite ways to play with snow and trains.

1.  Take Trains out in Real Snow

Okay, so this is maybe a no-brainer.  But it was really fun. 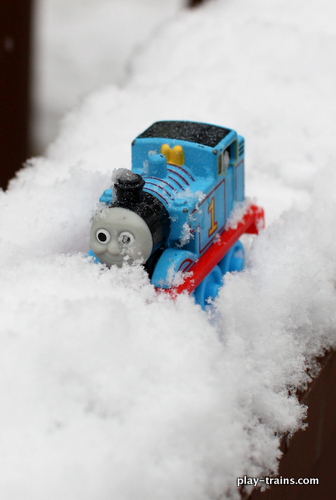 While we haven’t gotten snow this year, we did get snow last January.  That was the start of all our other explorations of playing with snow and trains indoors.

We happened to have acquired a Take ‘n’ Play Thomas with a snow plow second-hand, so as soon as we saw the inches accumulating, we wanted to take him out and see if he really could clear the tracks. 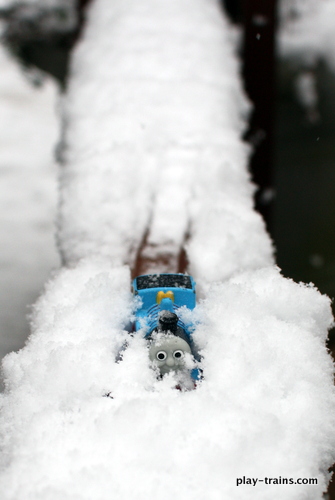 Not bad!  Now, the snow plow didn’t really help that much, so any Take ‘n’ Play engine would do.  I would stick with diecast metal trains, though, or plastic trains with no electronics.  The snow would be hard on the wood in wooden trains and the electronics in plastic motorized trains.  Just make sure you dry the trains off as soon as you’re done playing, and leave them somewhere where they can finish air drying without sitting in a puddle of melted snow, to avoid rust. 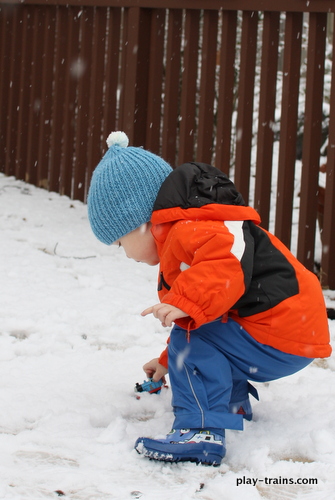 The Little Engineer carried Thomas around the backyard for a long time, occasionally trying to plow snow, but mostly enjoying the magic together. 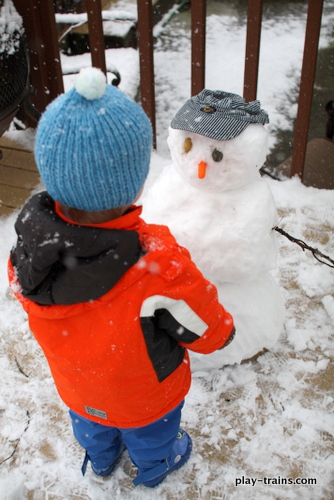 The Little Engineer’s first snowman was, appropriately, a Snow Engineer.  We happened to have an extra engineer’s hat lying around, and ta-da!  Ready to drive the Polar Express. 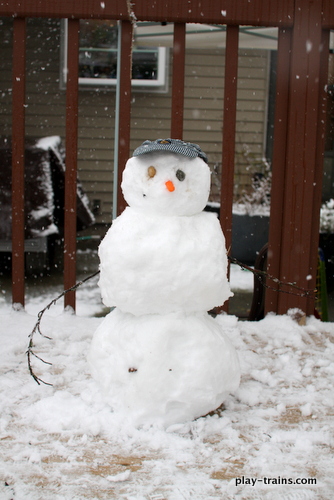 The Little Engineer also enjoyed pretending the snow was coal, shoveling it into a snowy firebox.

Right around the time we had that one and only good snow last year, No Time for Flashcards had this great Winter Train Table Sensory Play idea:  cotton ball snow.

So of course I went out and got two bags of cotton balls.  In the original post, the kids had used their snow as freight, among other things, but we decided we wanted to recreate our experience of plowing the real snow outside.  This involved lining up cotton balls on the tracks as fast as I could before the Little Engineer drove Thomas along behind me, sending the snow flying over the edges. 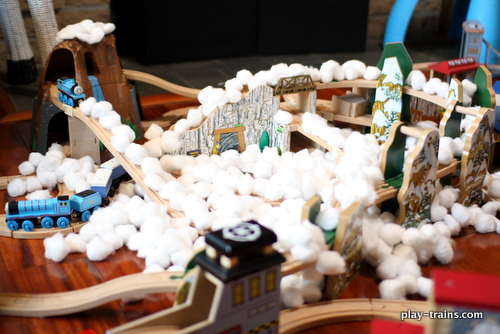 This is a huge amount of fun, as long as someone is willing to keep resetting the snow!  We have a Winter Wonderland Thomas (from the Adventures of Thomas set) with a snow plow, so he got to do most of the plowing. 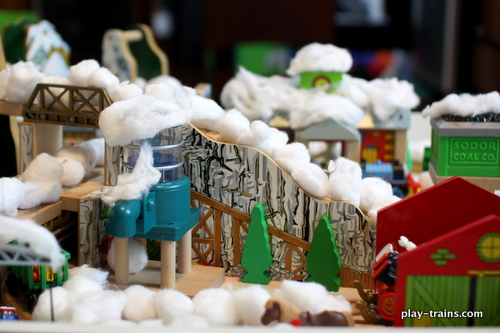 I kept the cotton balls available all year, and any time the Little Engineer came across them, he would dump them out here and there around the current layout and make it snow on the Island of Sodor, then ask me to put the snow on the tracks.  When December rolled around, though, I made a more intentional snowy Christmas layout on his tiny train table and covered everything with snow while he slept. 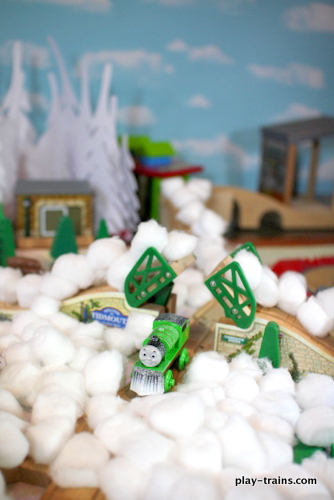 We also used cotton ball snow for the aftermath of the big snowstorm in our Valentine’s Day in Vicarstown layout.  My Christmas present from the Little Engineer was a Winter Wonderland Percy my husband ordered off of eBay, adding more plowing fun to our collection.

This was my husband’s big contribution to our snow train play.  When the Little Engineer started getting interested in “SCIENCE!!!” last summer, as he says it, my husband started looking around at different fun science things to do with a toddler.  By far, the most exciting thing he found was Insta-snow. 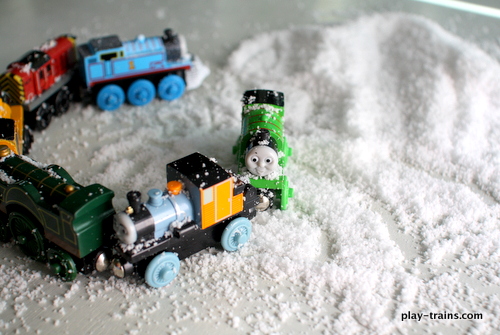 Similar to the absorbant gel inside a disposable diaper, Insta-snow expands (and expands) when you add water.  It turns into a fluffy, snow-like substance that’s really fun to play with and touch.  We were all enthralled.

Despite the moisture, the Insta-snow was okay for playing with our wooden trains, as long as you’re very, very careful not to leave them sitting in it.  After you’re finished playing, brush as much of the “snow” off of the trains as you can.  Some will stick to them, but once it dries, it’s easy to brush off again. 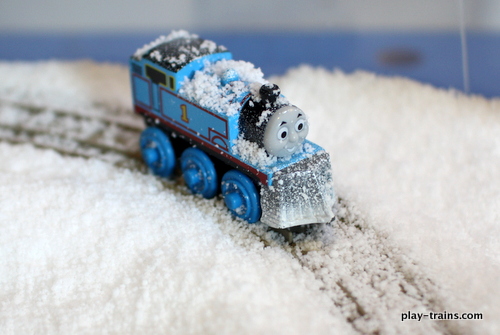 However, I would recommend against using wooden track in the Insta-snow, due to the fact that it’s unfinished.  Plastic track from both the Take ‘n’ Play and Trackmaster lines works with the wheel gauge of the wooden trains and won’t be harmed by the moisture.

When we first started playing with the cotton ball snow, the Little Engineer’s favorite thing to do besides plowing was to ask me to make “Poor Toby”. I really enjoyed singing, “Toooooby, oh Tooooooby, what would become of yooooouuu…” (found on Thomas’ Songs & Roundhouse Rhythms) every time we made “Poor Toby.”  I believe the lyrics to that song are where the Little Engineer got the phrase “poor Toby” from, misremembering or adapting “dear Toby” to his new game.

As I remember, “Poor Salty” was another favorite game at the time.  And then when we got the Insta-snow, “Poor Thomas” was fun, too. 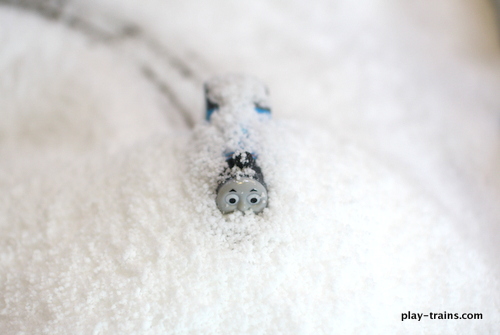 Years back, I got the prettiest iridescent wrapping paper at Ikea, in both white and a beautiful blue-green.  I loved it so much I bought several rolls.  The only problem was that Scotch tape wouldn’t stick to it properly, so all my presents came unwrapped.  Which made it pretty useless as wrapping paper, but I kept it all these years because it’s so pretty. Guess what?  I makes beautiful snow and water for train layouts!

Oh, it’s so pretty in person. I have to say, though, that I would mostly recommend the paper for train tables (no tape needed), and not for the floor.  It was kind of a pain to adjust the tape loops underneath as the paper shifted around while I built the tracks on top of it.  It has, however, mostly stayed in place in the weeks since, but it was a lot easier to deal with when I put it on the train table. 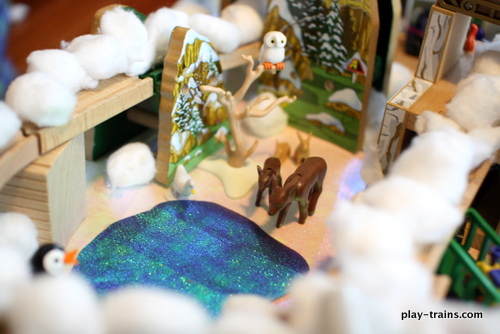 I used the blue-green paper to make the sea on the big layout, and a pond on the little train table.  These figures from a set of Playmobil toys I got in an advent calendar years ago made it a small, peaceful nature area for the trains to chuff around.

My replacement for the wrapping paper is a large three-yard piece of sparkly white felt.  It’s hard to see in photos, especially the sparkles, but it does give a nice natural look, didn’t need to be taped down, and it moved around less than the wrapping paper while I was putting the layout together. 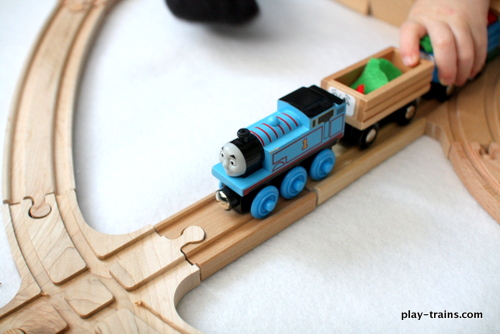 The problem with the felt was I had to double it up so that my black rug didn’t show through.  That and it’s not the pretty, iridescent wrapping paper.  But the durability does kind of make up for that. A trick I discovered in my quest to make everything snowy was to unroll cotton balls and gently pull them flat to make snow on the tops of buildings.  And I was really excited to find that snowman in the same Playmobil advent calendar I mentioned above.

You also may have noticed the white trees in the background of our various snow layouts.  They’re Christmas decorations from Ikea, and they light up…very fun for playing Night Train!

When I brought these tiny white pompoms home to be snowball freight for the engines to pull, I didn’t realize that our Brio people would be able to hold them in their hands.  That was an exciting discovery!  It took a little fiddling to figure out how to slip a snowball into their grips so that it stays, but once I got one in there, it was the perfect size. 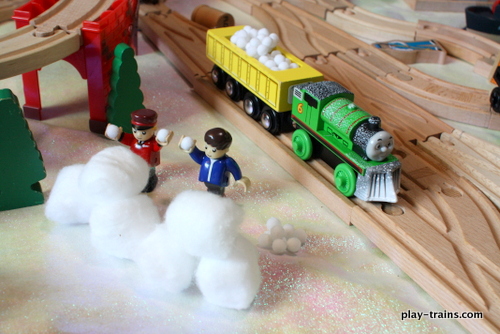 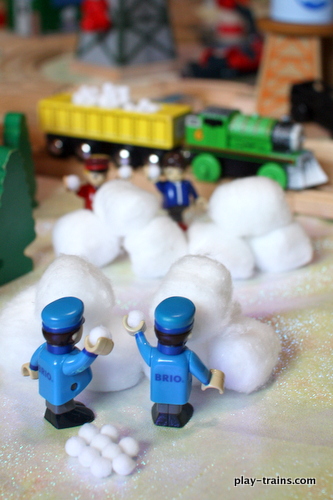 Cotton balls made great snow forts for the drivers and children to hide behind, too.

I hope you’ve enjoyed our look at ideas for bringing snow to train play (and trains to snow play)!