The Little Engineer still thinks our Grass Tracks from last year are fun, so I wasn’t really looking for a way to make them new again.  However, I also wasn’t going to ignore the wind when it whispered a way to make our favorite active train play even more fun. 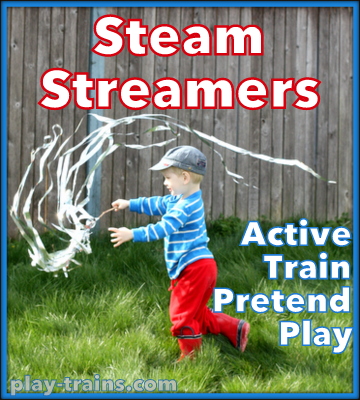 While we’ve had a number of beautiful, sunny days in Seattle this spring, the sun has often been accompanied by unusually wild winds.  On one afternoon earlier in the season, I wasn’t even aware of the swelling breeze, just taking it as a given.

I don’t remember what the Little Engineer was doing, but he must have been at it for awhile because I found my mind wandering.  I noticed the holographic tape I’d put up last summer fluttering from the grape vines.  It needed to come down, so the birds wouldn’t be accustomed to it when this year’s fruit ripened.

I started pulling down the tangled lengths of tape from the grape arbor.  As each piece came away, the wind whipped it up in the air, turning it from a bird deterrent into a beautiful, sparkling streamer.  I smiled, watching it twist and circle in the air.

At that moment, the Little Engineer let out a loud, “WhoooOOOooooooo!”

I picked up a piece of grape vine that had fallen to the ground during pruning and tied several streamers to one end of it.  Then I made another, smaller one.  When I ran out of holographic tape, I held my grape vine high above my head.

“Hey, check out my steam!” I shouted, and started to run. 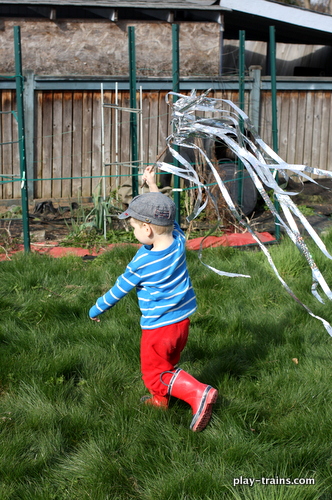 This, of course, did get the Little Engineer’s attention.  I gave him the smaller stick, and he ran around with me…but only for a short time before dropping it on the ground and going off to do something else.

I kept playing with my “steam”, as we call the streamers.  (As I’ve mentioned before, the Little Engineer likes to ignore the fact that steam engines puff smoke as well as steam, so we go with that.)  They reminded me of learning silk ribbon dancing, back when I used to tag along with a friend to Chinese school in my early teens.  I had fun trying to remember the moves, swirling the streamers in large circles.

But my favorite part about the streamers is that when they’re being blown about, from the wind or from us running with them or swirling them in the air, they crackle and snap in the air. It’s not quite the sound of a steam engine, but it makes quite a lot of sound, and it really does make me feel just a bit more like a train.

When a strong gust of wind sent my streamers flying, the Little Engineer did turn his head at the sound and get interested and watch, but he didn’t want to chuff with his again.  I was a little disappointed, but at least he’d given it a try.  The streamers went into his outside toy can, and I assumed that was the end of that.  At least as far as the Little Engineer went.  I really liked my steam! 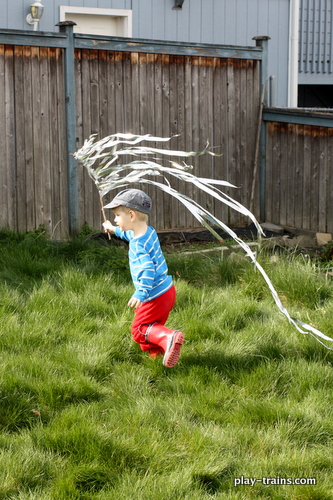 But as it turned out, the Little Engineer wasn’t done with the steam streamers.  The next time we went outside, he found them in the toy can and claimed the larger of the two sticks before heading up to the yard to run.

Oh, so that was the problem!

That time, he again dropped it on the grass after only a short time, but each time he’s played with it, he’s done so for a little longer. 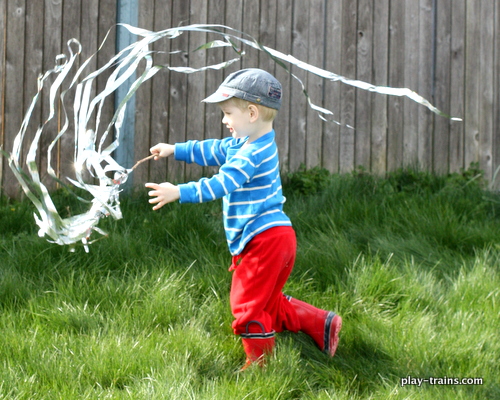 Our “steam” has slowly become an integral part of our outside train play.  Now, at some point he invariably yells, “Mama, get your steam!”  And we’re off and chugging down our grass tracks.

I need to remember that while sometimes it seems like he is rejecting an activity, a small tweak — or even just some time for the idea to grow on him — may be all that’s needed to get him interested.  Do you find that’s true with your child?