While searching for train books on Amazon for the eight-hundred-and-seventy-sixth time, I spotted Steam Train, Dream Train.  Just from the thumbnail, I was drawn in by the cover art.  When I clicked to take a closer look, I knew why.

It turned out Steam Train, Dream Train is the new book by Sherri Duskey Rinker and Tom Lichtenheld, the author and the illustrator of Goodnight, Goodnight Construction Site.  We love their first book, and I liked the title and look of the new one.  I preordered the book, and was happy not to have to wait long.

We’ve had it for several days now, and I can report that we’ve read Steam Train, Dream Train at least once every night at bedtime.  Often twice…or more!  It tells the story of animals playing with toys while loading them into a freight train.  It all happens in a train-loving boy’s dreams, as the final illustration reveals.

As someone who read their first book and wished it was about locomotives, I was slightly disappointed not to see Rinker and Lichtenheld’s take on anthropomorphic trains.  In Goodnight, Goodnight Construction Site, the construction vehicles’ vivid personalities are very suited for the work that each vehicle does, which offers children a very clear, if fanciful understanding of each one.   I would have loved to have seen the same treatment for the freight cars in Steam Train, Dream Train.

But as a writer, I can completely understand why they wouldn’t have wanted to make the books too similar, and the book has it’s own unique charm and tone.  The animals in Steam Train, Dream Train carry the reader along through the story with buoyant energy.  This book is more of a race to bed than a bedtime ritual…and really, that’s more in line with what happens at our house every night.

As you can see from the book trailer, the pictures are beautiful, the pastels on dark paper vibrant yet dreamy. I also really like a number of the verses in the narrative.  My favorite part comes at the end.  I love the use of a steam-like chh in place of the usual shh on the final page: “Steam train, dream train . . . chhhhhhh . . . goodnight.”

I enjoy reading the book aloud, and I can’t deny the appeal of it for the Little Engineer.  He adores the animals and loves the “freight part” (basically from when the engine driver gives the crew the go ahead to start loading the freight cars until the story gets to the caboose…he forgets there are more pages after the caboose).  He asks for me to read that again and again, which has made me realize just how much I like the beginning and ending of the book.  I often insist on reading them against his orders. 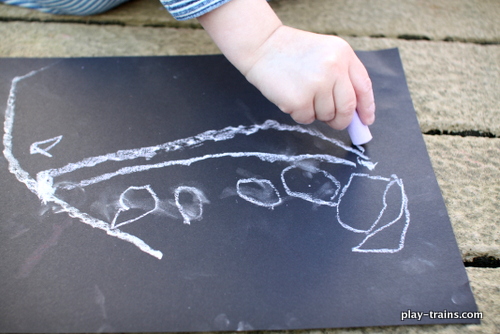 I wanted to capitalize on the Little Engineer’s interest in the book and do an activity to go along with it.  “Live action” Steam Train, Dream Train, as he would call it, would be a lot of fun.  But we already do a lot of pretend play with animals riding Big Engine or toys going into freight cars we push around the house, and I was in the mood for something different.

I decided to focus on the beautiful artwork in this picture book.  I knew the Little Engineer enjoyed the pictures, and I wanted to share with him some of the more subtle reasons why I loved them, too.

We ended up doing two drawings inspired by the book this week.  Our first exploration of the art style was a chalk drawing of a train on black construction paper.  The Little Engineer has just started drawing recognizable steam engines in the last month, so he was happy to draw yet another locomotive. 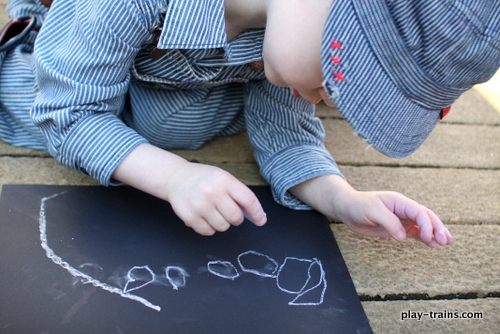 “First, I’m drawing the big driving wheels,” he told me as he drew five circles. 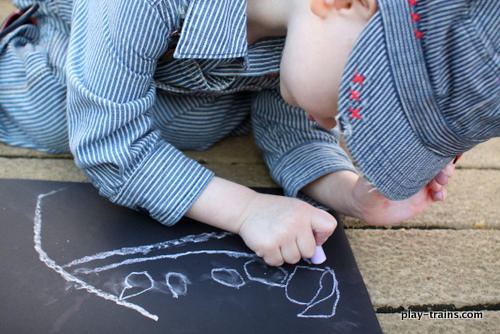 After he drew the boiler, next came “the whooshing part of the funnel,” as he called it, and then the “steam part” of the funnel. 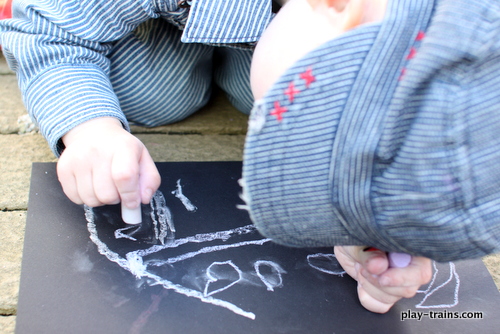 He often likes to design engines that have separate funnels for smoke and steam.  This is progress; not too long ago, he was unwilling to admit that steam engines puffed smoke as well as steam, no matter how many times we read about it in books.

He added some more details, like a small, tight scribble for the driver’s cab, but it seemed like the chalk was starting to frustrate him. 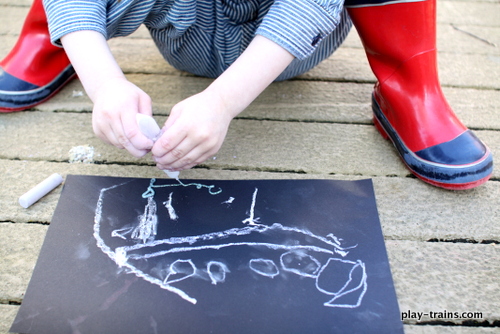 I had glitter glue out for another train art experiment, and he decided to use it for his steam. 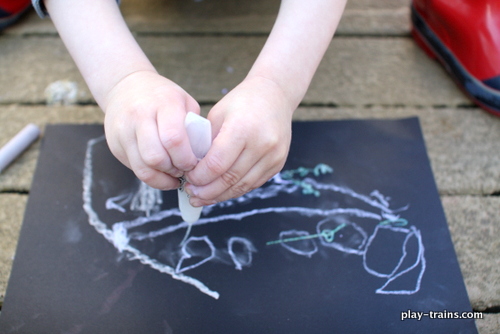 Then he used it to draw the pistons and connecting rods. 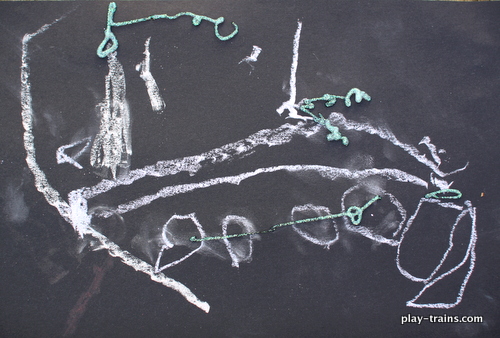 Here’s his finished drawing.  I pointed out how bright it looked against the dark paper, but didn’t make a connection to the book at this point.  I wanted to give him his own experience of chalk on dark paper first.  We’ve drawn with chalk on black paper before, but it’s been a long time now, so he most likely doesn’t remember.

Next week, I’ll share the second drawing we did inspired by Steam Train, Dream Train, the one that earned the honor of being the Little Engineer’s favorite part of an otherwise pretty great day.  In the meantime, you can imagine us reading the book at bedtime every night, because we will be!

Update:  Exploring the Art of Steam Train, Dream Train (Part 2) is now up!  This second project really meant a lot to the Little Engineer, so I hope you’ll take a moment to read about what we did. 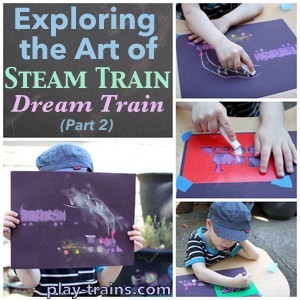 P.S.  So, are you wondering what my art experiment was?  I was inspired while running around the backyard with the Little Engineer:  dandelion puff steam! 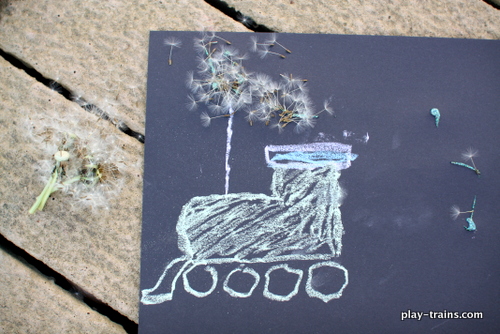 I drew the train (I had a hard time making the chalk do what I wanted, too) and added the dandelion seeds.  The Little Engineer drew the funnel and provided the glue.  He was not keen on the dandelion puff steam for his own drawing, which is just as well.  It doesn’t really have anything to do with the book, other than it needed to be added to a train drawn on dark paper.  I’ll be thinking up a way to develop this into it’s own project soon, and maybe he’ll go for it then.

This post contains affiliate links.  I purchased my own copy of the book, and all opinions are my own.