The Little Engineer had the unexpected good fortune to meet up with his friend, Yardmaster Tom, and play trains this weekend at the Seattle Mini Maker Faire.

Every year, Yardmaster Tom — known to the rest of us as Tom Stephenson, the creator of the wTrak Modular Track Standard for Wood Train Tables — generously brings his wonderful train tables to a few train events in the Seattle area.  But we were surprised to get a text message from a friend that “the coolest train tables ever” were at the Mini Maker Faire.  Given that I had described them in exactly those words a few months ago in wTrak: the Coolest Train Tables Ever, we knew exactly which train tables our friend meant! 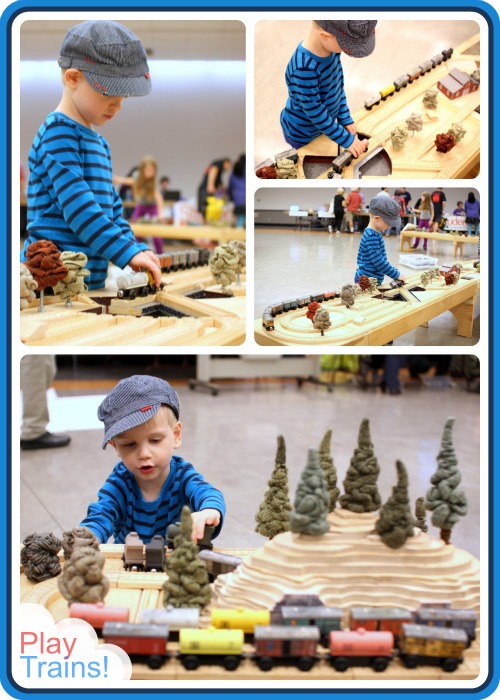 After accepting the fact that the Thomas & Friends engines had been replaced by Tom’s custom engines, the Little Engineer had a great time playing on his favorite train tables. As much fun as the Thomas engines were for us, the new engines made the layout look like a local Northwest logging railroad.

The best part was that because this wasn’t a normal train event, there weren’t crowds of kids there to play with the trains.  There were a lot of older kids playing this time, too, possibly because of the lack of Thomas engines, or because it was a different kind of event.  And by the end of the day, the Little Engineer was in the middle of a dream come true:  he had the wTrak tables all to himself. 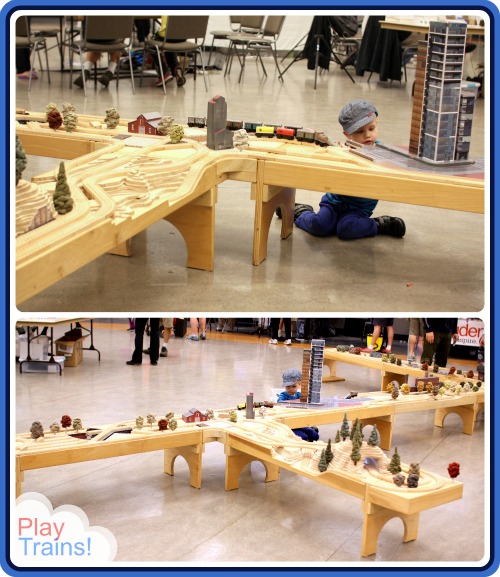 It was also a lucky break for me, because I’ve never been able to get a photo of the whole setup before.  It’s usually hidden behind all the kids!

Late in the day, the Little Engineer was getting tired, but couldn’t bear to leave the tables behind.  After taking a rest under a train table for a few minutes, he spent a long time playing with the tiles that Tom uses to plan new configurations of the layout.  The Little Engineer played with them as an open-ended puzzle, and then went to find an engine to chuff down the tile tracks. 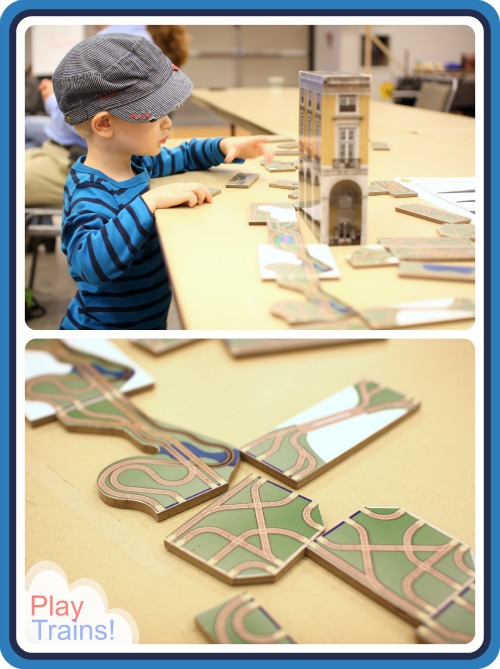 Finally, he played a bit more with the trains, and then the faire was over for the day.  But he had a special present from Yardmaster Tom to take home with him, which we’ll be showing you soon!  The Little Engineer is very impatient to put it together and test it out.

There were many other cool things for kids to see and do at the Mini Maker Faire, but I only got a quick look around, as we spent all four hours we were there at the train table.  Maybe the Little Engineer will briefly venture away from the trains next year to check the other exhibits out!

If you’re interested in learning more about the wTrak system, you can read our review of the tables, wTrak: the Coolest Train Tables Ever and visit the wTrak website.  The 5th anniversary update to the standard is available as a PDF on their site.  It’s full of beautiful pictures and useful information if you’re interest in making stuff for wooden trains, and an excerpt from our article appears in near the end.