This relaxation technique for children is based on Dr. Wendy Sue Swanson’s recommendation of teaching anxious children to “blow colors” as a tool to calm themselves down.  Please visit her wonderful blog, Seattle Mama Doc, to read Help Your Anxious Child: Blow Colors and watch the accompanying video.

It’s dark in the Little Engineer’s bedroom.  We’re lying side by side in Big Engine, his bed. The bedtime rush is over.  Books have been read, engineer’s hats hung on hooks, stuffed meerkats tucked under the blanket.  But despite my son’s silence, his tosses and turns betray restlessness. 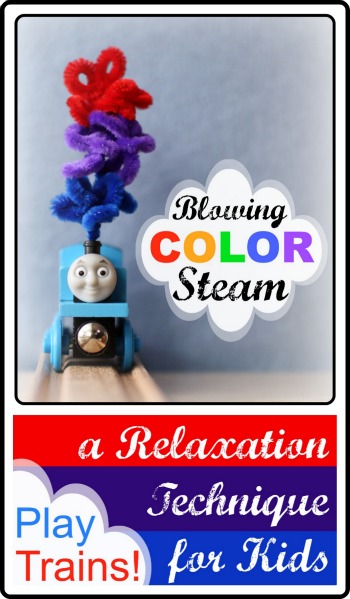 “Hiro?” he finally says, calling me by the name of “my” engine from the Thomas & Friends world.  The fact that he pronounces it more like “Heer-whoa” in his sweet, thoughtful voice never fails to melt my heart.

I expect his correction before I finish speaking. “Use Hiro’s voice, Mama.”

“Yes, Thomas?” I repeat, this time with my best attempt at Hiro’s voice.

“Can we blow color steam tonight?”

The Little Engineer has made this request on many nights since I first read about “blowing colors.”  My answer is always, “Of course, Thomas.  I am always happy to blow color steam with you.”  But inside, I’m saying an enthusiastic “Yes!”

As someone who has been plagued with anxiety and a restless mind for most of my life, I’m thrilled when the Little Engineer remembers he has a tool to help himself relax and settle in for sleep.  So far, he hasn’t had my troubles with anxiety, but his mind seems to wake up and work its best at the same time his body needs rest.

Those issues aside, with the speed and stress of life ever increasing, any child could benefit from learning to consciously relax from an early age.  Too many of us adults are playing catch-up on learning that skill.  So I was very excited when I first read about Dr. Swanson’s article about Blowing Colors.  It sounded easy to explain, and I knew it would appeal to my son’s fascination with color.

Better yet, I didn’t even have to think about how to adapt it for my train-loving kid; the image of trains blowing steam in a rainbow of colors leapt into my mind immediately! Blowing colors is a wonderful exercise on its own, but it’s somehow a smaller leap of the imagination to visualize a train blowing steam in colors than it is to imagine colors coming from your lungs.  In real life, you can already see a steam engine blowing its white steam and gray smoke.  As for the colors…well, there could be something unusual burning in the engine’s firebox! 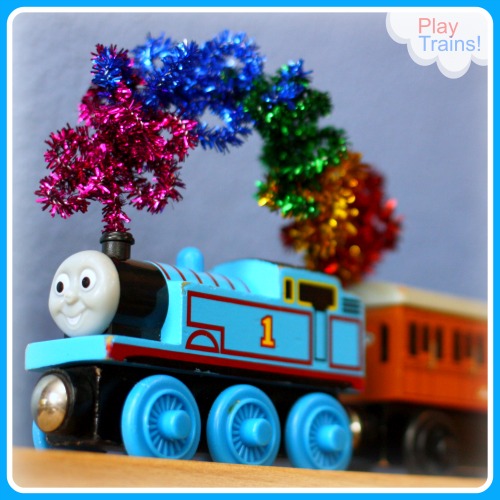 Note: If you like Thomas’ steam in the pictures for this post, we’ll be showing you how to make your own homemade steam soon!

When I introduced the idea to the Little Engineer, I simply asked him, “Thomas, would you like to blow color steam?”  He said a “Yes!” just as enthusiastic as the one I described hearing in my mind above.

We lay on our backs and I prompted him to blow red steam with me, then orange, yellow, green, blue, and purple.  Then he asked to blow all the colors of steam a second time, and then a third.  On subsequent nights, he made me add more and more colors (black, white, silver, bronze, gold, pink, and brown) as a way of extending the activity — or, more accurately, the length of bedtime.

For the next week and a half, he asked to blow color steam every night.  A story quickly arose around the ritual. We pretend Thomas is staying the night in Hiro’s shed (according to the Little Engineer, it was built over the overgrown siding that Hiro rusted on for decades before Thomas found him).  Thomas is restless and can’t get to sleep.  As Hiro, I remind him what a big day of work we have on the railway tomorrow and ask if he would like to blow color steam with me.

The Little Engineer’s interest in the colors of our steam has turned it into a great way to encourage language development as well.  That first night, he started asking me, “Hiro, what will your red steam be as red as?” 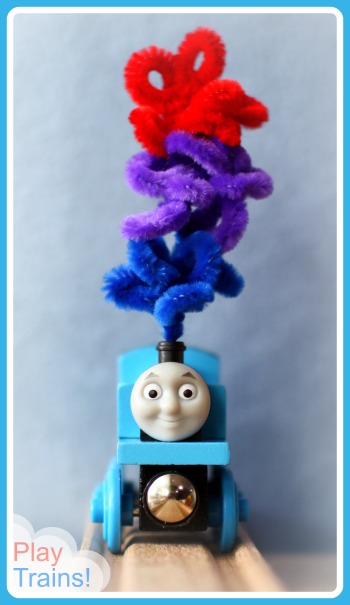 Note: If you like Thomas’ steam in the pictures for this post, we’ll be showing you how to make your own homemade steam soon!

At first, inspired by my engine’s home country, I tried to pick haiku-like nature images to introduce more words and images into the Little Engineer’s vocabulary. “My steam will be as red as the maple leaves in the fall,” I would tell him, then ask, “What will your steam be as red as?”

Eventually I joined him in picking what he really wanted to talk about: Thomas engines that matched the colors.  Our red steam is as red as James, Skarloey, or Thomas’ footplate, our green steam is as green as Percy (“Because he is my best friend!” the Little Engineer comments) or Henry.  When blue comes up, I tell him, “My blue steam will be as blue as your paintwork, my friend.”  He used to blow his black steam as black as “my” paint, but now we usually both blow steam as black as each other’s funnels.

As far as the technique’s effectiveness, it really calms the Little Engineer down.  I think it’s doubly powerful because we do it together.  Not only is he relaxing his body, but he’s reconnecting with me in what seems to be a very meaningful way to him.

I’ve noticed a strong effect on myself, as well.  When I close my eyes and blow out a long breath, using my mind to push the image of the colorful steam along with it, I feel a great deal of lingering stress rushing from my body.  It seems to relax me more thoroughly than the deep breathing exercises I’ve been using for years.  Which is good, because at this age, bedtime can be stressful for everyone involved.  On the nights that we blow steam after a less-than-pleasant lead up to bedtime, we’re both in significantly better moods by the time he drifts off to sleep than when we don’t.

We don’t blow color steam every night now, but the Little Engineer asks to do it once or twice a week.  I also suggest it when I know he’ll need some extra help getting to sleep.  He’s three-and-a-half now, so he doesn’t always say yes when I ask if he wants to blow color steam later.  But often he’ll change his mind by the time the lights go out.

This relaxation technique could easily be used to help children through other stressful times.  But for now, we’re keeping it as a bedtime ritual, so I’m looking into some other options to teach him to use during the day.  I’ve included some links to some great ideas below, but if you have a relaxation technique that works with your child, I would love to hear about it!

NutureStore made a beautiful Bedtime Sensory Tub with Lavender Dyed Rice.  I can just imagine how soothing the combination of the color, the scent, and the feeling of the rice between fingers would be!

Creative Playhouse compiled 15 Play Ideas to Help Children Calm Down and Relax.  If you’re looking for ways to help your child relax, I can almost guarantee you’ll find something that works for you on this wonderful list.  I’m still going through the links, but I’ve found several things to try with the Little Engineer.

Creekside Learning shared these 4 Ways That Kids Benefit From Yoga, plus several great books about yoga for kids.  I’ve always wanted to get the Little Engineer learning yoga.  He wasn’t ready to focus on it in the past, but he might be old enough now. Maybe he and I could make up some train names for yoga poses…

Connecting Family & Seoul put together this fantastic The Mommy Meltdown Basket.  What I love about this idea is it’s not just a practical solution to have ready for those meltdown days, but it also teaches children by example that it’s important to take care of ourselves as well as those we love.

Mama. Papa. Bubba. gives her daughter a Calming Bedtime Bath to get her ready for sleep, and also shares these pretty Lavender Rosemary Bath Fizzies you can make ahead with your child to have ready any time a relaxing bath is needed.

Finally, here are two more activities that help the Little Engineer before bed: 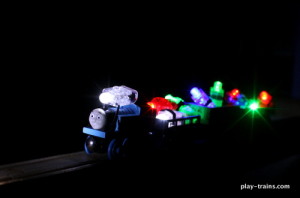 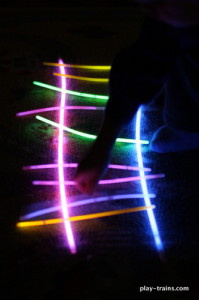