This is a great way for kids to show their affection for their favorite stuffed animals, especially if their plush friends like to play trains with them!

The idea came to me while creating a pattern for the felt engineer hats I’ve been sewing for some very special stuffed animals.  At the time, we had recently read Mr. Puffer Bill, Train Engineer, a Golden Book from 1965.  It was inspired by the true story of the invention the now-iconic engineer’s cap by a real railroad engineer.

There are a couple things I edit as I read aloud because they don’t translate well in this day and age.  In particular, the bit about the engineer not wanting to wear his wife’s bandana wouldn’t make any sense to my son, for more than one reason.  But I love — LOVE — the moment when Bill sets out to invent the perfect hat that will keep his ears warm without flying off when he drives his engine.  There’s such an emphasis on the word “INVENT”, written just like that in all caps in the book, that it makes it seem almost like a super power.

This was a fun way for the Little Engineer to follow in Mr. Puffer Bill’s footsteps, and he was quite happy to join me at the art table to make engineer hats of our own.  I had printed off one for each of us — I really wanted to make one, too.  (You’ll find the download link at the end of the post.) 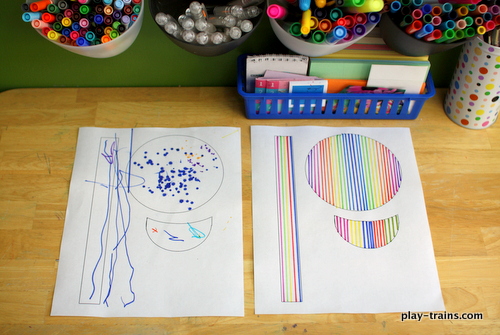 We decorated our hats with markers.  St. Patrick’s Day has rainbows on my mind, so I decided to step away from tradition and make rainbow-colored stripes.  The Little Engineer was interested in my use of a ruler to make straight lines, and gave it a try.  But then he decided he’d rather make “engineer dots” than stripes.  I’m not sure the tips of the markers he used will ever be the same, the way he was ramming them down on the paper.  But they made the coolest splatter marks around the edges of the dots, so I let him go with it. 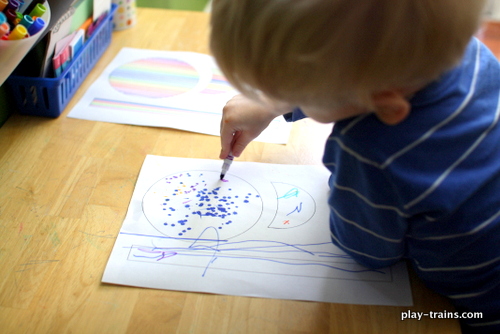 After I cut out the pieces of our hats, the Little Engineer decided they needed to be sorted into piles by shape.  It was a nice opportunity to name the parts of the hat for him (crown, band, and brim). 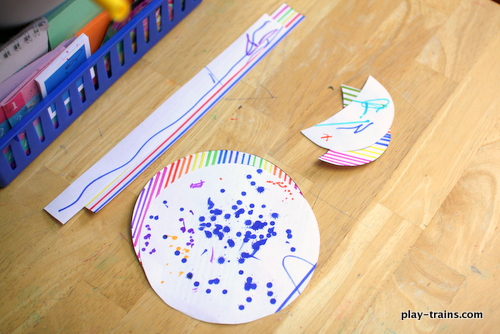 The assembly of the hat is mostly for us grown-ups, though if the Little Engineer hadn’t had his attention elsewhere on the art table, I would have had him help with the tape.  An older child could probably do this…not sure how old, because I haven’t had one of my own yet.

First, after deciding how wide you want the front of the cap to be, you fold pleats on either side of the center line of the hat’s crown. 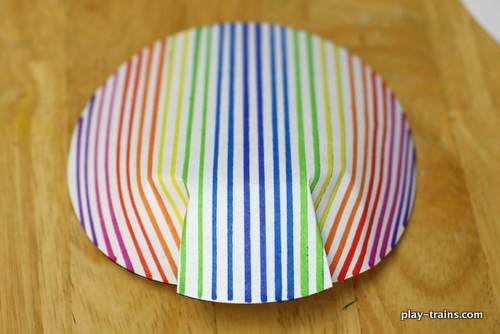 Fold matching pleats forward from the sides of the hat.  The bottom corners of the pleats should touch when flattened. 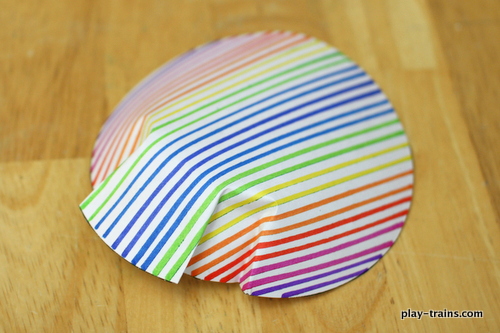 Use tape to secure the pleats. 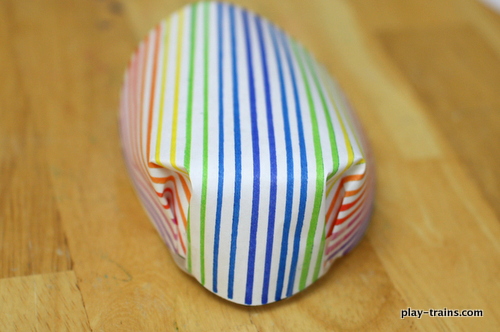 Turn the hat around, and repeat on the back side. 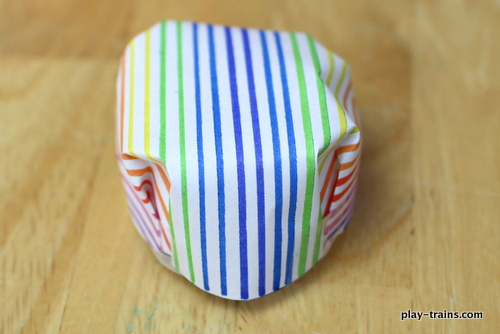 Wrap the band around, once again securing it with tape, both to itself and to the crown. 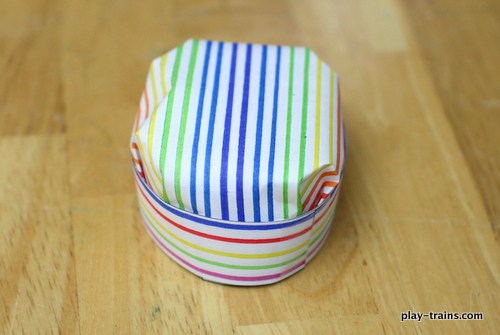 Finally, center the brim behind the band on the front of the hat and tape it in place. 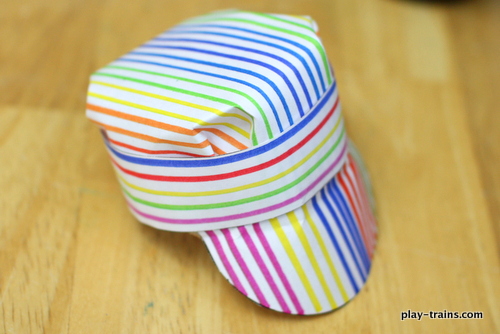 I decided the brim was too long, so I pulled the tape up and adjusted. 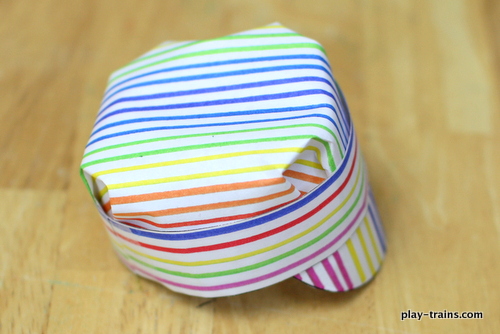 Unfortunately, the paper isn’t as flexible as the felt the pattern was designed for, so the brim doesn’t stick forwards the way I’d like.  I’m still trying to think of a solution to that, so if you figure it out, let me know.

After I had one hat put together, I asked the Little Engineer to go find a stuffed animal to wear it.  He brought this soft and snuggly monkey out. 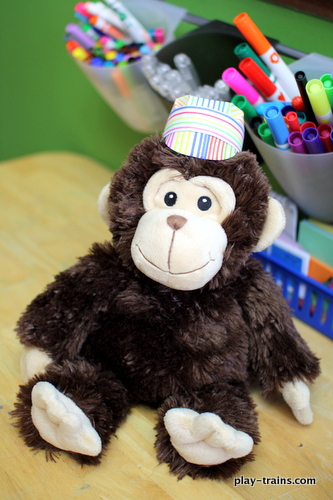 And for the hat my son designed, we found another monkey.  The Little Engineer was very happy to see the hats on his friends. 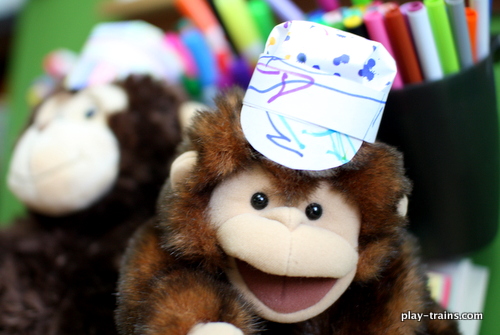 I suspect these two will be hauling bananas to a zoo sometime in the near future. 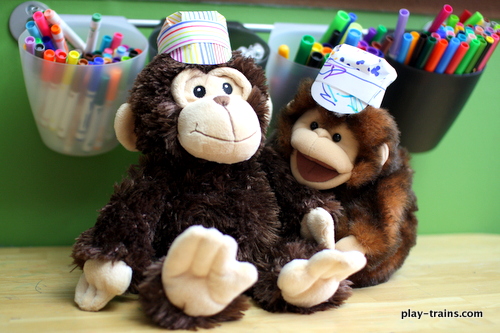 This was pretty much as much fun for both of us as I had hoped it would be.  Keep an eye out for my how-to for the felt version of this hat, as modeled by Meekat, my son’s meerkat engineer friend below.  Update:  read DIY Felt Engineer Hats for Stuffed Animals! 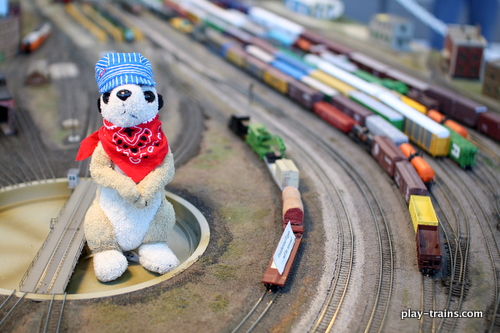