The Little Engineer and I started celebrated St. Patrick’s Day with our trains by decorating a few engines and making some new freight. Here are several easy ideas for ways to incorporate the holiday into any kind of toy train play. 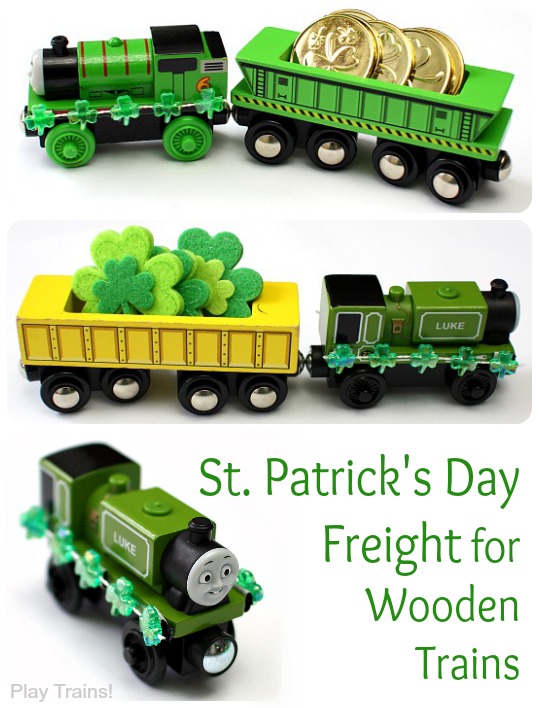 This post was originally published on March 3rd, 2013. It contains links to Amazon.com. If you click on one, we will receive a small commission — at no additional cost to you — on anything you buy at Amazon for a certain length of time afterwards. Read our disclosure policy for more details.

The Little Engineer responded with enthusiasm to my invitation to come help make freight for St. Patrick’s Day. We started off by decorating some of our green engines — Luke, Henry, and Percy — for the holiday. 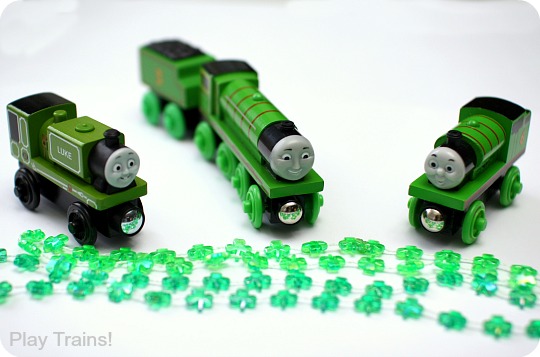 I picked up this pair of green plastic shamrock necklaces at Dollar Tree yesterday. They’re a nice size for the engines. I might have to go back and get more to be garlands on the buildings in the layout. They may have to go up over the hearts from our Valentine’s Day in Vicarstown layout, because the Little Engineer won’t let me take them down yet. 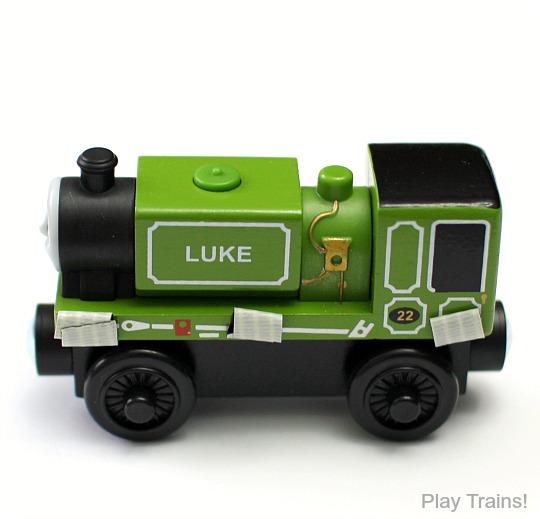 I used the same tape I praised in Damage Free Decorating for Wooden Train Layouts, this time in three little loops along the foot plate of each engine. 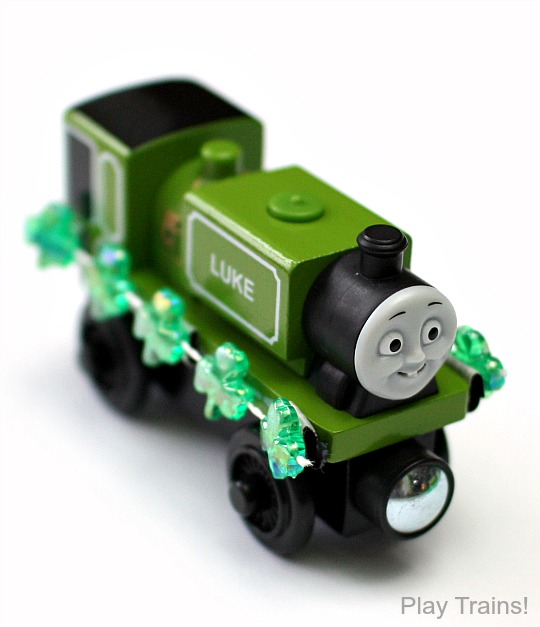 Then I cut a length of the shamrock necklace to fit and stuck it on.  With these necklaces, the small engines took five shamrocks down a side, the big coal tender engines took seven, and the coal tenders can have either three or four. 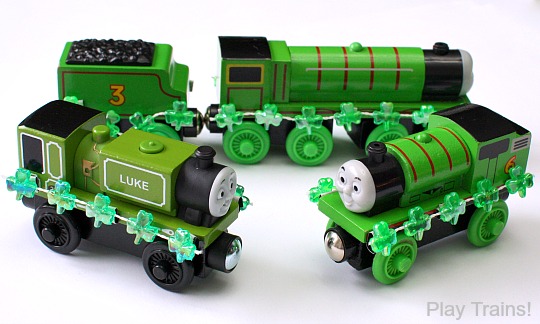 In the process, we talked a bit about Ireland and the holiday. A little bit, I should say.  Our discussion was very narrow.  After I mentioned that I believe Luke from Blue Mountain Mystery is an Irish train and started picking up other green engines, most of our conversation revolved around questions like, “Is Henry Irish?” “Is Percy Irish?” “Are green engines Irish?”  (We decided they pretend to be Irish on St. Patrick’s Day.)  At least he’ll have the color association between Ireland and green down.

Now that they were all spiffed up for St. Patrick’s Day, they needed some holiday freight to pull.

As the Little Engineer would say, Ta-da! 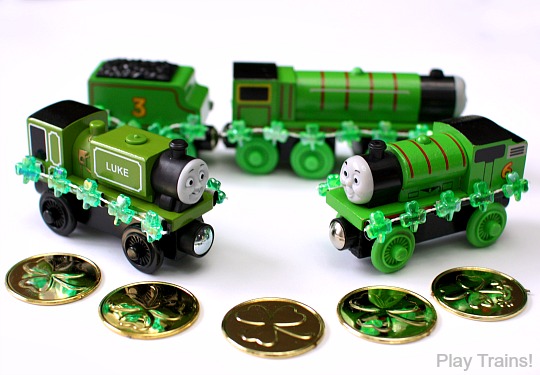 I picked up a bag of plastic gold coins with shamrocks on them at Jo-Ann Fabrics. 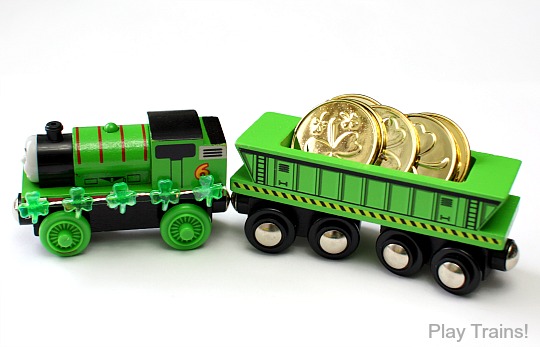 I had also picked up two different packs of felt shamrock stickers.  The slightly more expensive pack had stickers in two different colors and three different sizes, similar to the heart stickers I used for the Easy DIY Valentine Freight.  They went together much like those hearts, only these were a bit trickier due their not being symmetrical. 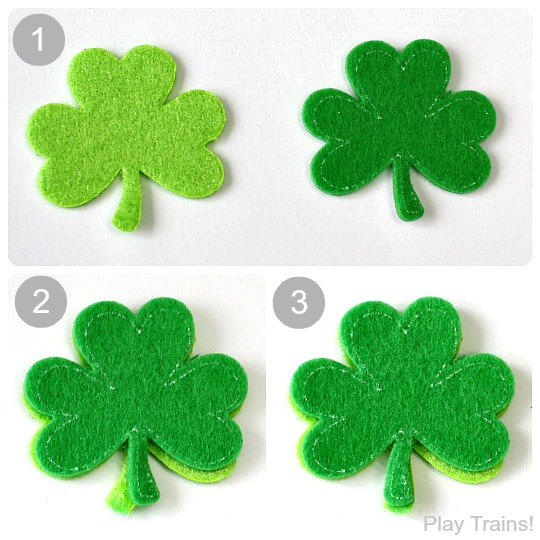 1. First, you peel off the backings and stick two of the shamrocks of the same size together.  I liked making the two sides of the shamrock two different colors.  It makes it look like there are more shamrocks in the freight cars than there really are.

2. See how the stems don’t line up?  I was worried that would be a problem, but it was a pretty simple thing to fix.

3. I just pinched the end of each side of the stem, pulled them apart slightly, and then stuck them together as straight as possible.  Then you can put a smaller shamrock sticker on top, if you wish. 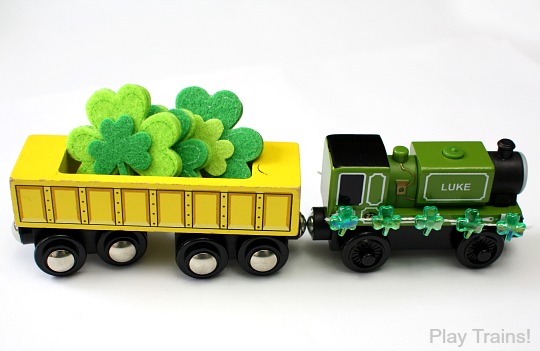 The Little Engineer also had fun loading these into the freight cars.  Even though they’re pretty much the same thing we did for Valentine’s Day, the new shapes, colors, and context were exciting and new for him.

The less expensive shamrock stickers were more difficult to work with.  The backings didn’t come off easily, and along with the stems, their leaves weren’t symmetrical. They all came out a bit twisted.  I got fed up after about three of them, but I may go back and do the rest when I can watch some TV and distract myself, because the next part was fun. 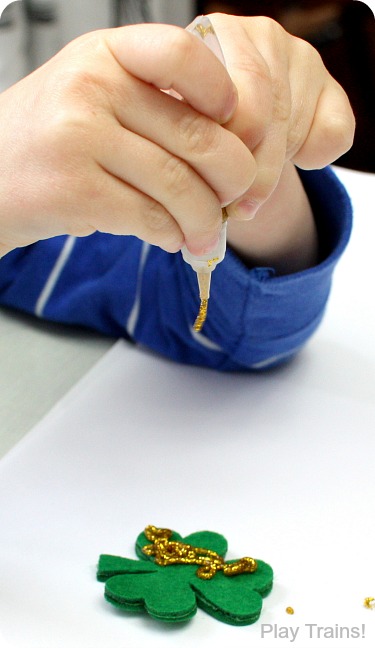 They looked a little plain, so we got out the glitter glue and decorated them. 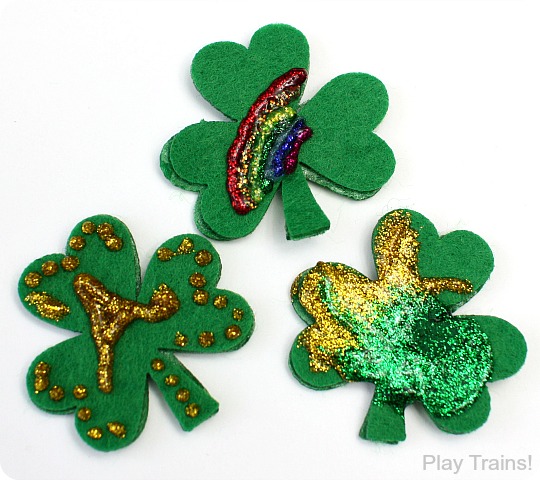 They turned out pretty cute with the glitter glue on them.  I was thinking that if I wanted to put myself through sticking enough of the shamrocks together, it could be fun to make a whole alphabet of lettered ones to play with.  The Little Engineer saw the “A” I put on the one I did and asked, “Is the ‘A’ walking?”  Why yes, now that you mention it… 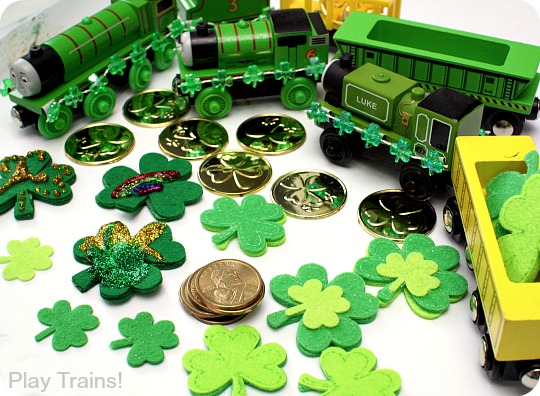 It didn’t take long before we had plenty of green ready for playing trains this month.  I walked away for a few minutes and came back to find the Little Engineer loading the leftover pieces of the necklace into a freight car, so there’s that option as well.