A tiny light box needs a tiny train set to go with it, right? Once I came up with a way to make our own mini light box, I was on a mission to find trains that would work with light boxes or light tables. Especially small ones, given that was what we had. I came up with this tiny, translucent train set. It’s part DIY, part lucky finds, and a lot of fun! 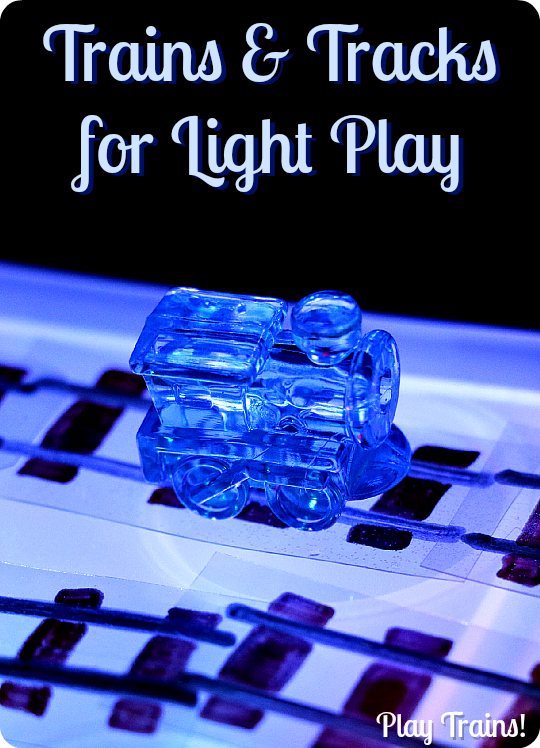 First, we needed track to put the trains on.  I originally shared how to make these tracks in our Floating Word Discovery Bottles post, but I also intended to use them with the light boxes as well. After rescuing them from the word bottles and letting them dry off most of the way, we had fun building a long (but tiny) layout across two of the mini light boxes. 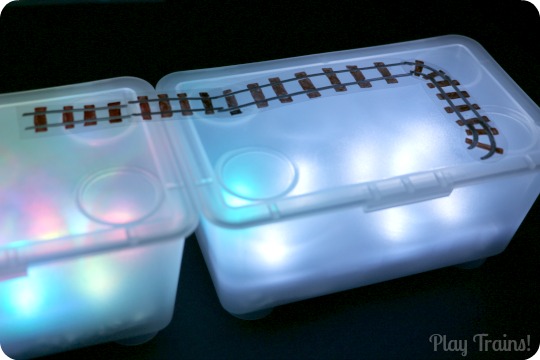 They do slide around a bit when bumped. If you feel this would get frustrating, you could either draw a layout the size of your light box(es) on the laminator plastic so that there wouldn’t be individual pieces. Or, you could get the track pieces a little damp so they stick to the light box. On another occasion, we even stuck some to the sides of a light box while we were playing with it in a tub full of water. 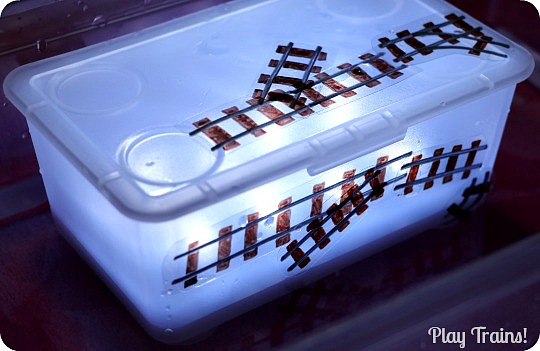 Next, we needed trains. Months — or more? — ago, I came across these tokens for playing the Mexican Train domino game on one of my late night searches for cool train stuff. 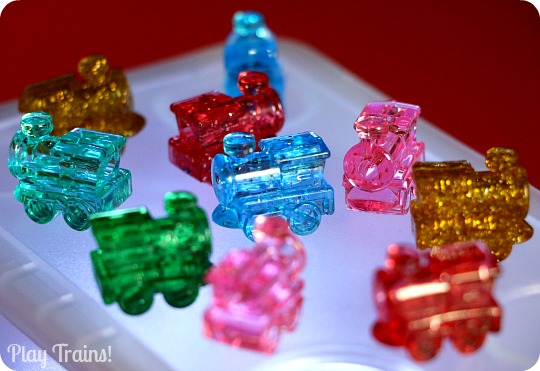 Really, they’re plastic train beads, similar to the ones we used in the two-color oil and water discovery bottles. And I suspect they’d cost a bit less if they were being marketed as beads. Seeing that only some of the trains were translucent and the specific colors weren’t guaranteed, I ordered two packages of the “game tokens”, and about half the trains turned out to be translucent.

Aside from wishing I could just buy a bag of them from the craft store, I think the clear trains look fantastic with the tracks, so I’m really pleased with them. 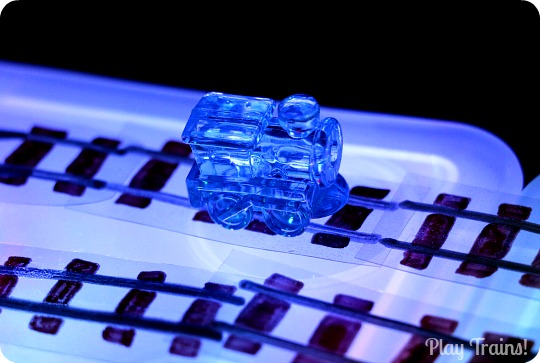 One element that made this especially fun for the Little Engineer was adding these cute little people — or “Meeples”, as they’re called — from an expansion to the game, Carcassonne. He enjoyed putting the trains on the tracks — especially the blue one — but the people really made the scene come alive in his imagination. 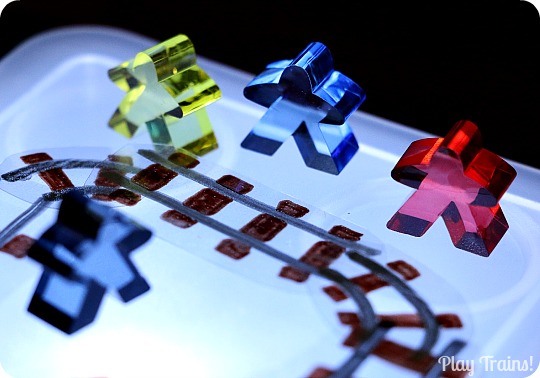 Unfortunately, I just looked and they don’t seem to make the expansion pack anymore. I need to learn to check these things before I get to the point of writing up an activity! However, there are a couple of options: if you’re interested in the game — it’s a wonderful game — you could buy the 10th Anniversary Edition of Carcassonne, which comes with 40 transparent Meeples in 5 colors. (It also seems to be out of production, so you may want to shop around.) Or you could search eBay or other sites for the Carcassonne Phantom Expansion. The game itself is going to be a much better deal, but if you really, really wanted just the six, you could probably get them for a lower price than the whole game.

Another more frugal option would be to draw people (and even trains) on the plastic when you make the tracks and cut them out to play with on the light box. We might make something like that for fun one of these days. But I do really love the way the little train set looked, and it was very inviting for the Little Engineer. 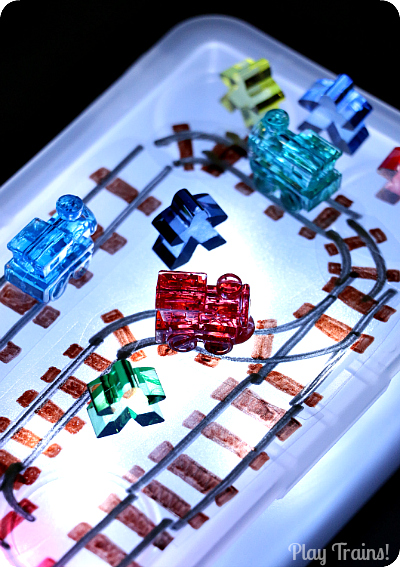 When we’re not playing, all of the supplies fit with room to spare inside the light box itself. This makes it an easy set to take down any time you need a change of activity, or when you’re headed out the door. 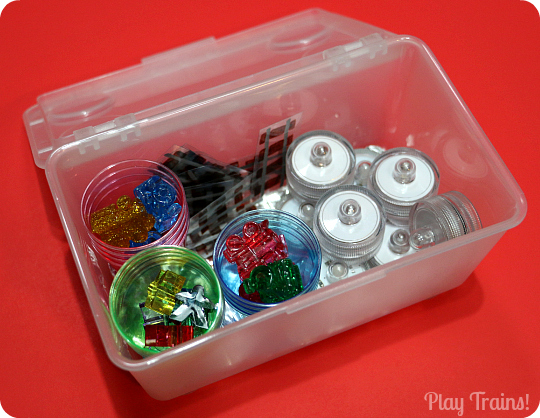 If you’d like to make one of your own — they’re really easy to put together — here’s the how-to: 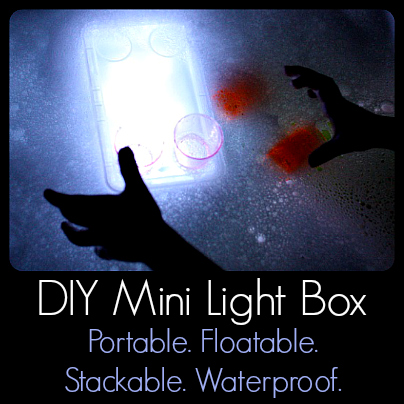 And if you’re interested in more glowing activities, here are a few of our favorites: 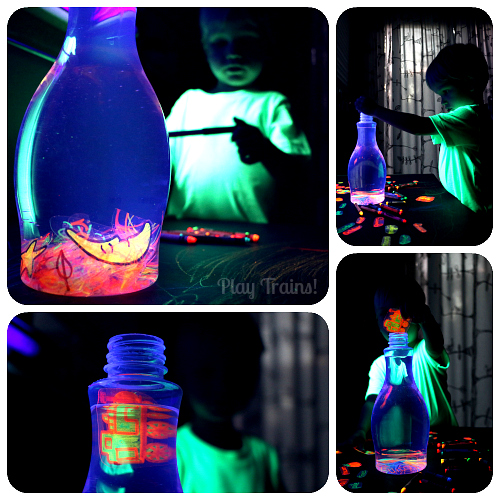 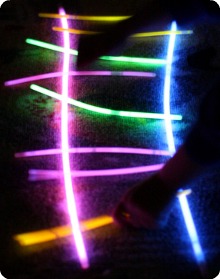 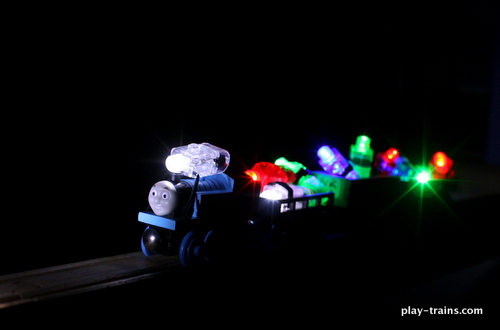