Today I invited the Little Engineer to build a railroad with fall spices — a wonderful way to engage the senses and imagination in a seasonal way!

This is our fourth activity in the Fall Invitations to Play series. Working with My Nearest and Dearest, Twodaloo, Fantastic Fun and Learning, and Buggy and Buddy, together we’ve shared twenty invitations for fall play so far, and we have five more to come tomorrow. Make sure to check out my blogging buddies’ Invitations to Play, linked to at the bottom of this post. It’s so fun to see all the different ways these creative women come up with to invite their kids to play! 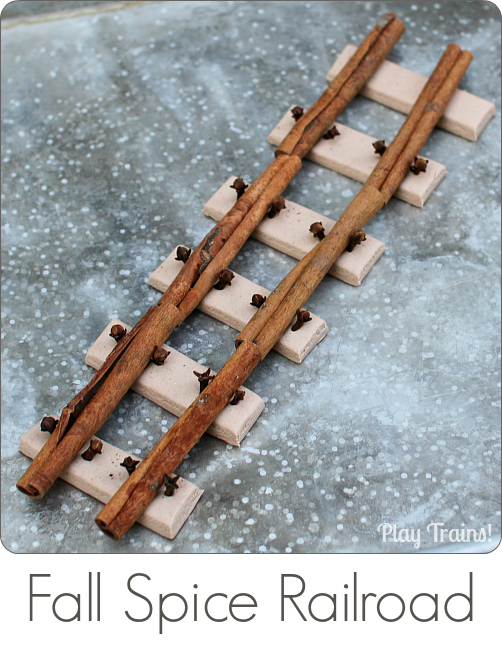 This invitation combines the appeal of building train tracks with sensory play, exploring the wonderful smells and textures of the materials. Creating with the cinnamon sticks, cloves, and play dough works fine motor skills. And there’s plenty of inspiration here for imaginative play!

Roll out some of the play dough and cut rectangles for the railroad ties. Place them on the baking sheet or tray, checking to make sure they’re a good distance apart to support the cinnamon sticks. Arrange spices in bowls and place on the tray, along with the knife, dowel, mallet, and remaining play dough, now rolled into a smooth ball. Place two or three cinnamon sticks on the ties, and press a couple of cloves into the play dough on either side of one of the sticks. 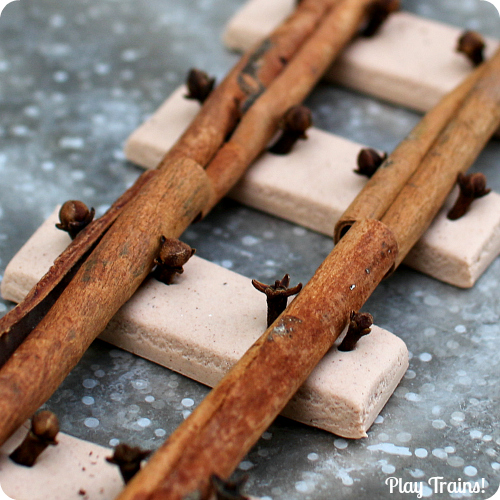 The Little Engineer started by taking everything I had put together apart, even placing the railroad ties on top of the play dough ball. Then he built the railroad all by himself from scratch. He also stood a cinnamon stick up in a blob of play dough to be a signal, and when I was experimenting with using the cinnamon sticks as the legs of a play dough animal, he looked at it and pronounced it a water tower. He spent a lot of time rolling a piece of the play dough flat, then flipping it and rolling it flatter.

Children may, of course, ignore the suggestion to make a railroad and create something totally different from this invitation…and that’s great, too. (For another track building activity that can be done at the beach or in the sandbox, plus a book that your child can learn a lot more about track building from if they’re interested, see our Sand Tracks post.) 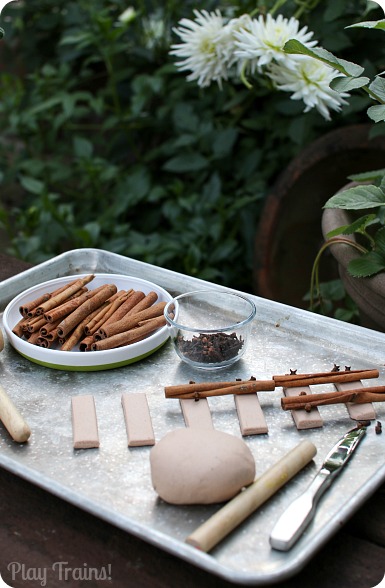 Chelsey, Ann, Stephanie, and Shaunna have some wonderful invitations to share with you over at their blogs today. You won’t want to miss any of their creative ideas for fall play!

Apple Orchard Invitation to Playby My Nearest and Dearest