I kept my first two activities for the Winter Play Days series intentionally simple because I knew I was gearing up for something epic: wooden train ski jumping in honor of the Winter Olympics! This one activity has caused a huge surge in the Little Engineer’s interest in the Olympics, winter sports, and geography. On top of that, setting up and playing with the ski jump track is a great hands-on science activity, exploring physics with all the adjustments to be made to the shape and angle of the track, the elevation of the jump at the end, and the weight of the trains going down the track.

But mostly…did I mention the epic part? You have to watch our video! This is so much fun.

After you’ve visited the slopes, don’t forget to go see what my Winter Play Days friends at Fun-a-Day!, Fantastic Fun and Learning, Nothing if Not Intentional, My Nearest and Dearest, and Buggy and Buddy have come up with for fun and creative winter play! I have links to their activities for today at the end of the post, so be sure to make it all the way to the bottom of the mountain with Thomas and Hiro. 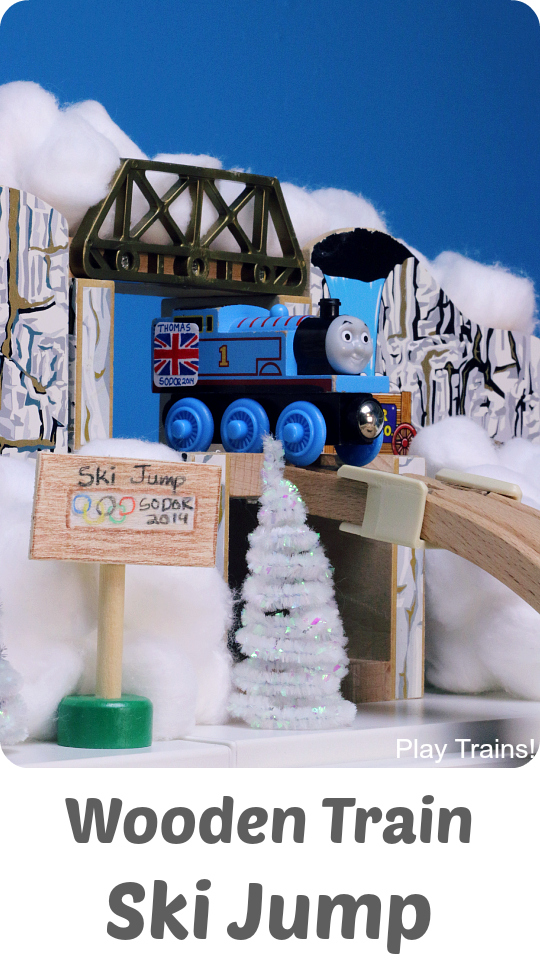 Anything that can be described as a “train jump!” is always a big hit with the Little Engineer. I was so excited when I realized that I could do Winter Olympics activities for this series, mostly because I immediately knew I wanted to do this with him:

Now doesn’t that look like fun? I hope it does…because it really, really is!

First, I’ll walk you through setting up a basic ski jump track. Then, I’ll show you a few of the details we added to the scene, none of which are necessary, though many greatly enriched the play and learning value of the activity. Finally, I’ll show you how we played with it all.

1. If you’re using them, assemble the magazine files. Find something sturdy to raise one up so that it’s lower end is as close to the height of the higher one as possible. We used an overturned empty plastic storage tub that was close to the right size.

2. Build the train ski jump slope from the wooden train tracks. You can either experiment on your own, or recreate the shape of our slope. In the photo below, the end of the track on the left corresponds to the bottom of the slope, and the end on the right becomes the top, that last curve sort of hooking over the top of the magazine file. 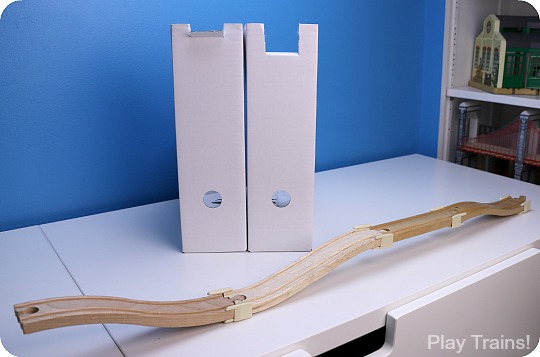 3. Getting the angle of the track just right took a great deal of fiddling. One thing that helped was cutting track-width notches at the top of each magazine file. That allowed me to adjust the angle of the curves and dips of the track in two separate places and get the bottom of the slope as close to ramping up as possible. In the photo below, the lower magazine file is on the left, and the upper one, which needed to be cut into more to get the angles correct, is on the right. As you’ll see later on, we also stuck a mound of cotton balls under the bottom end of the track to raise it up higher.

Here’s an unadorned view of the train ski jump (minus the cotton balls underneath the bottom point of the slope). You may be able to see the other useful advantage of the Suretrack track clips in this situation, which was they were wider than the notches I cut in the magazine files and, due to some luck with the placement of the tracks, prevented the slope from slipping downward. 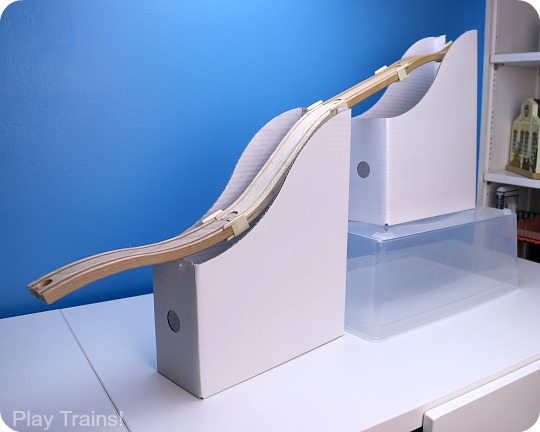 Two more adjustments you’ll likely need to make both at the beginning and during play:

The building part of this activity is less precision and more enjoyable trial and error. Luckily, it’s not a bad thing when the trains derail or crash. At least not to the Little Engineer, anyway!

Finally, here you can see how we hooked the whole slope up to our mountain on top of the toy chests, using another ascending track, a short straight track, and a couple more Suretrack clips. 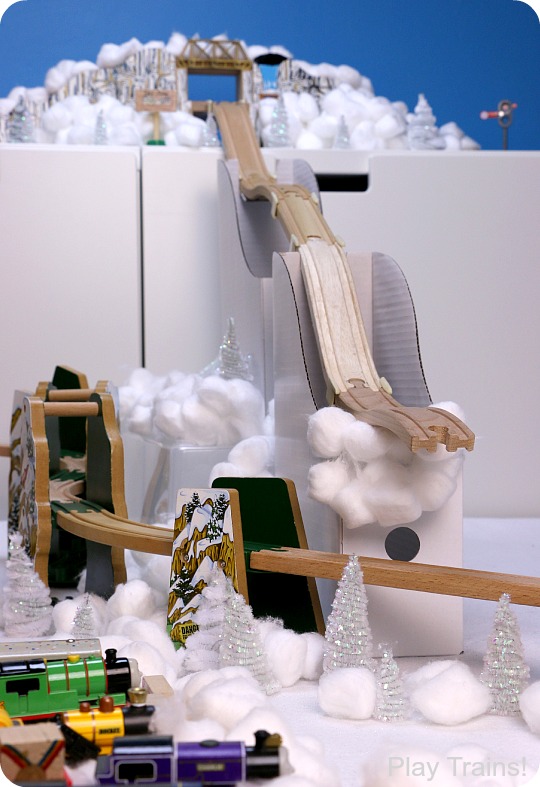 The Details: Characters, Scenery and Props

The first thing I wanted to add to the scene was a “Ski Jump” sign. I drew with colored pencils on a craft wood rectangle — cardboard would do just as well — and stuck it to an existing train set sign with a bit of blue poster tack. As I was making it, it occurred to me that “Sochi” and “Sodor” sound a bit alike, so our Train Olympics became SODOR 2014. 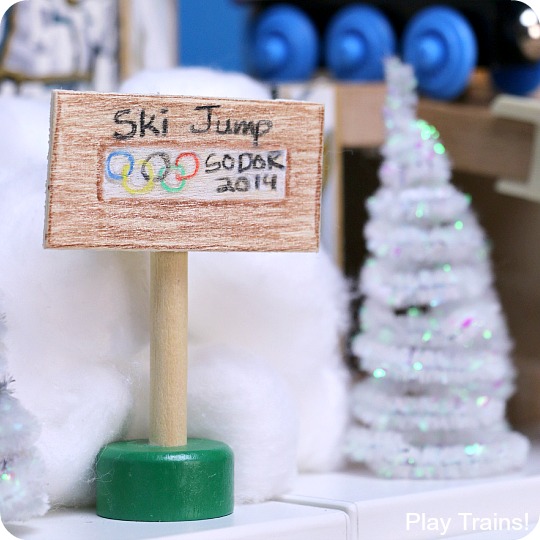 At the bottom of the mountain, out of the way of the landing area, we build some tracks for other trains to chuff up to and watch the train ski jump event. The Little Engineer was quite interested in the word “spectators” — he kept saying it, laughing, and then asking for further explanation of what it meant — and he enjoyed picking out which other trains got to be there. 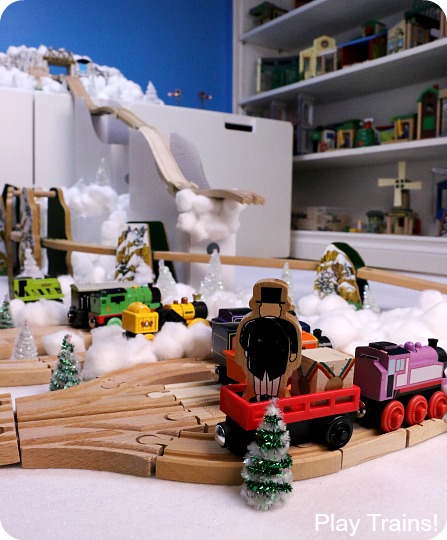 I haven’t gotten around to trying my ideas for making medals for the trains to wear quite yet, but I did take a small wooden cube and turn it into the crate they came to the mountain in by drawing medals with red, yellow, blue, and gold Sharpies. They rode in the same car as Sir Topham, who was there to cheer on his engines and observe the event in his capacity of Controller of the Railway Games. 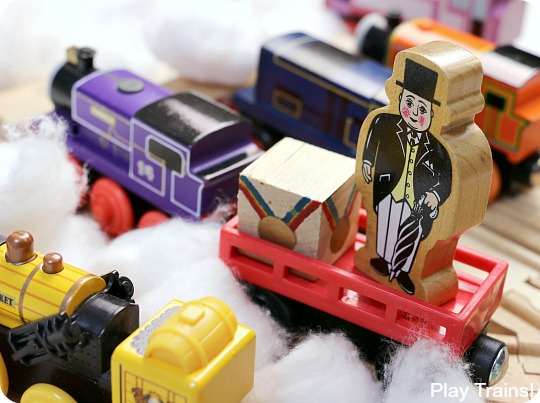 Flags for the Competitors

One of the most fun parts of this was the flags we put on the competitors. I’ll have a post up in the next day or two about how to make them. They sparked a lot of interest and curiosity about the flags and the countries they represented. We came up with more Thomas & Friends engines from countries other than the UK than I expected, so I’ll also have that list for you. Those engines will probably be appearing in future Train Olympics activities, because we have a few more planned already. 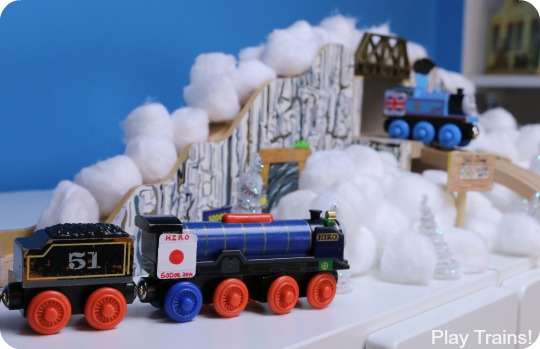 I already have mentioned the sparkly white felt and the cotton ball snow. We also added the snowy, white pipe cleaner Christmas trees we made in December.

You can probably see them in a few of the photos. The Little Engineer grabbed a couple of these and set them near the top of the mountain to signal to Thomas and Hiro when it was their turn to go. I thought it was pretty fun that he anticipated the need for something like that in a sporting event. The Little Engineer pushed him carefully from behind, and down the slope he zoomed! The end of the slope approached so quickly. The anticipation…the exhilaration… 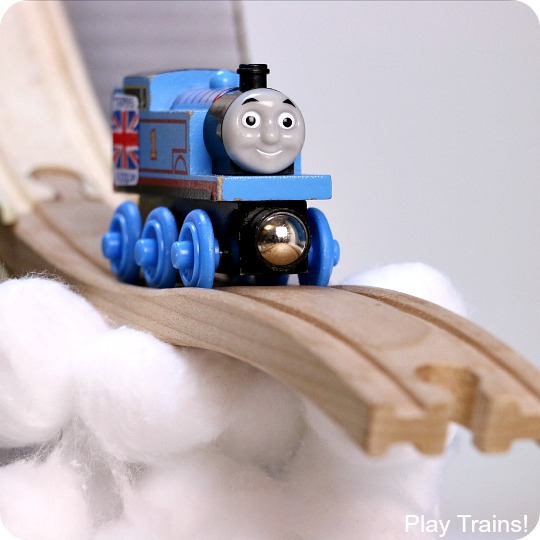 The relief of a soft landing in the snow! (It took a full somersault before he landed on his wheels like that.) We had Cranky the Crane on hand to lift the trains back on track. 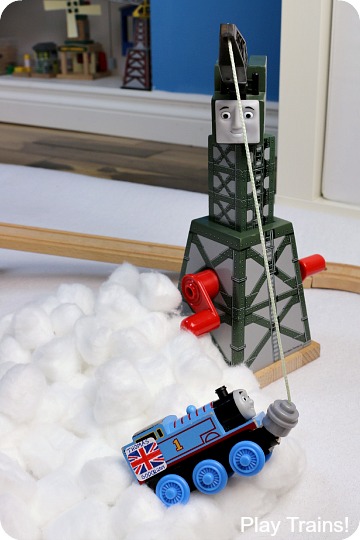 Next, it was Hiro’s turn. A longer, heavier engine, made even heavier by the coal tender coupled up to him. We lined up cotton ball snow for him to plow through as he went down, and it flew off the track. 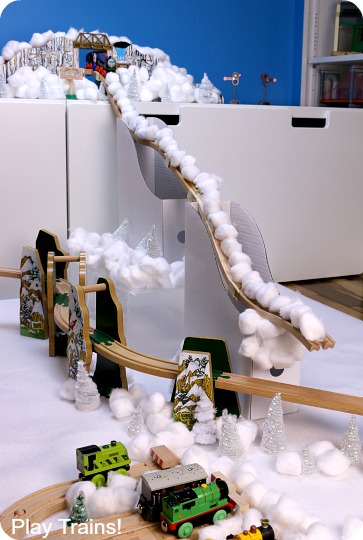 Another fun thing we did was to couple up freight cars behind the engines and fill them with pom poms. It was fun to watch them go flying as the train leapt from the tracks and bounced along the snowy ground. I don’t have any photos of this, but you can see it in the video. (Watch the video! Really!)

And, of course, any time the engines started to derail or fly off to one side or the other, it was back to fixing the track, figuring out how to get it at just the right angle.

Learning about the Winter Olympics

Like I said at the start, I knew the Little Engineer would enjoy this just because it involved “train jumps”. But I had no idea how much of an impression it would make on him. We watched a video of ski jumping from the 2010 Olympics, and afterwards he asked, “Can I do that?” When I told him yes, but that he’d have to learn how to ski down the slopes without jumping first, he got really excited. “I’m going to jump the farthest, and I’m going to WIN!”

My son, the Olympic hopeful. If by chance that every comes to be a reality, I can’t wait to tell the reporter that it was all because of wooden trains ski jumping.

Well, that’s it for Winter Play Days from us! If you enjoyed this activity, then make sure to sign up for our email newsletter:

And be sure to visit my Winter Play Days friends to check out their awesome winter play activities for today!

Baby, It’s Cold Outside! Playing and Experimenting with Ice from Nothing if Not Intentional

Colourful Fun in the Snow from My Nearest and Dearest

Our other posts in the Winter Play Days series: 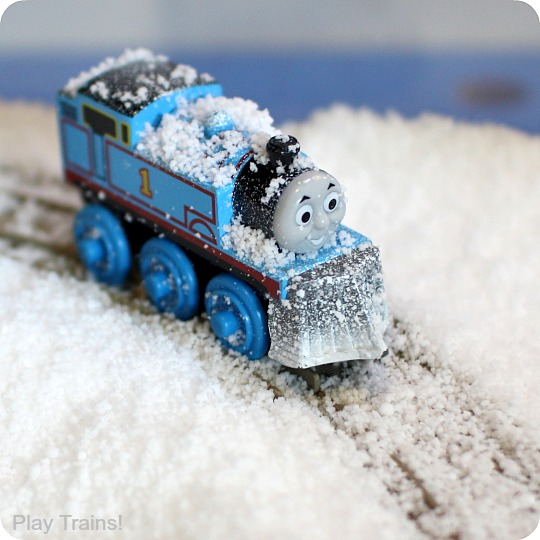 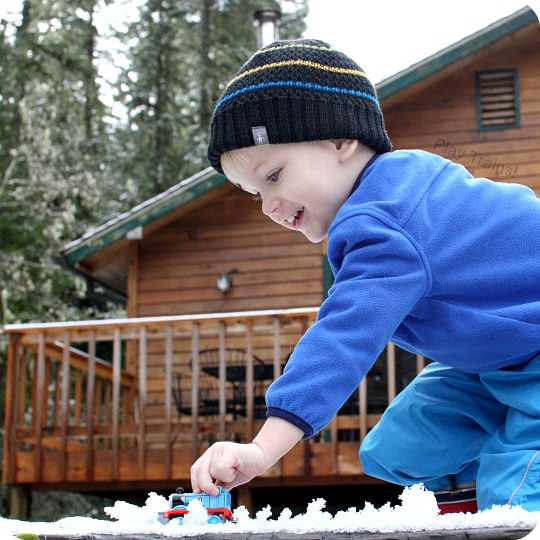 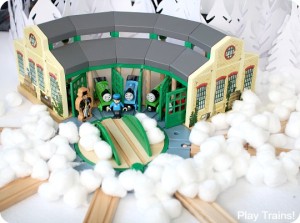 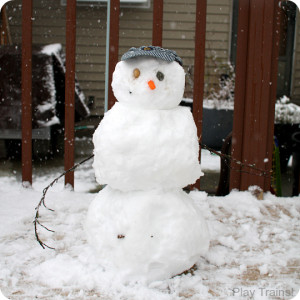 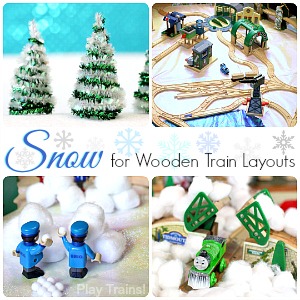 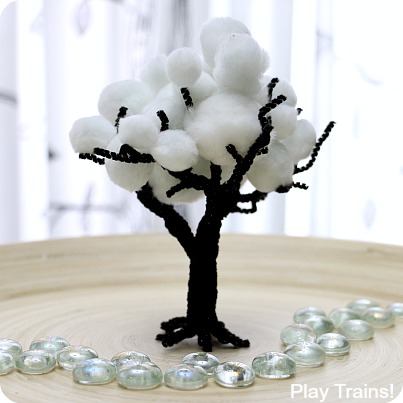